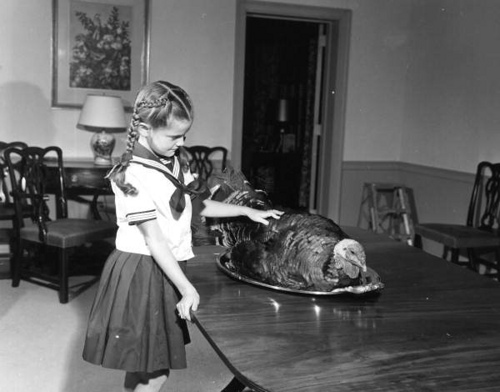 (Via Black and WTF.)

My Kind of Holiday

“Thanksgiving is wonderful and for all kinds of reasons. To begin with, it has the commendable effect of staving off Christmas … Moreover, Thanksgiving remains a pure holiday, largely unsullied by commercialization. It involves no greeting cards, no trees to trim, no perplexed hunt through drawers and cupboards for decorations. I love the fact that at Thanksgiving all you do is sit at a table and try to get your stomach into the approximate shape of a beach ball and then go and watch a game of football on TV. This is my kind of holiday. But perhaps the nicest, and certainly the noblest, aspect of Thanksgiving is that it gives you formal, official occasion to give thanks for all those things which you should be grateful. I think this is a wonderful idea, and I can’t believe that it hasn’t been picked up by more countries.”

“Concerning Thanksgiving, that most distinctive and unique of all American holidays, there need be no resentment and no recrimination. Likewise, there need be no wearisome present-giving, no order of divine service, and no obligation to the dead. This holiday is like a free gift, or even (profane though the concept may be to some readers) a free lunch – and a very big and handsome one at that. This is the festival on which one hears that distinct and generous American voice: the one that says ‘why not?’ Family values are certainly involved, but even those with no family will still be invited, or will invite. The doors are not exactly left open as for a Passover Seder, yet who would not be ashamed to think of a neighbor who was excluded or forgotten on such a national day?”

“And it was never by once a year that they were brought together anyway, and that was on the neutral, dereligionized ground of Thanksgiving, when everybody gets to eat the same thing, nobody sneaking off to eat funny stuff – no kugel, no gefilte fish, no bitter herbs, just one colossal turkey for two hundred and fifty million people – one colossal turkey feeds all. A moratorium on funny foods and funny ways and religious exclusivity, a moratorium on the three-thousand year-old nostalgia of the Jews, a moratorium on Christ and the cross and the crucifixion for the Christians, when everyone in New Jersey and elsewhere can be more passive about their irrationalities than they are the rest of the year. A moratorium on all the grievances and resentments, and not only for the Dwyers and the Levovs but for everyone in America who is suspicious of everyone else. It is the American pastorl par excellence and it lasts twenty-four hours.”