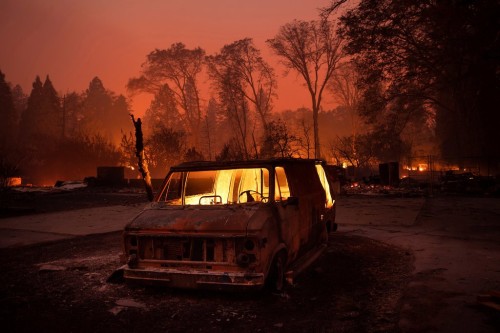 1. How to Live With Wildfires

Much of the Netherlands sits below sea level and is therefore prone to flooding, but the Dutch can’t exactly move en masse next door to Germany. So they have learned over the centuries that the solution is to stop fighting the sea, and build their cities and towns to maximize saving lives through smarter planning and infrastructure. We could do the same with wildfire.

2. How Californians Are Breathing in the ‘New Abnormal’ of Epic Fires

“In high-pollution places like Beijing, design masks show up on runways and street-style blogs.”

“Recent studies place suicide as the third leading cause of death for college athletes, behind motor vehicle accidents and medical issues.”

4. These Americans Are Done With Politics

“The study shows that most Americans have political tastes that are not uniform: They may lean toward one party, but they see things they like in both. Its findings suggest a deep hunger for political leaders who are practical and not tribal — who do not cast the world in starkly moral terms, but in bread-and-butter policy terms.”

“The continual presence of cameras has a way of eroding public affection for whatever they are trained on, while paradoxically increasing appetite for the subject matter.”

6. Buying to Last: Back to a Bygone Era

“The idea of buying goods that last isn’t new, of course. It was what consumers did in earlier generations. But the notion of lasting value appears to be resonating these days with young, value-conscious, environmentally aware buyers who are rebelling against the proliferation of cheap, disposable goods or the planned obsolescence built into many products.”

7. Get a Handle on Your Pots and Pans

“Finally, the Great Disruption has come for your cookware.”

“For his entire adult life, away from the spotlight, Armstrong amassed a huge trove of personal writings, recordings and artifacts.”

9. Victoria’s Secret Has Trouble Fitting Into the #MeToo Era

“Consumers have come to reject the ideals that Victoria’s Secret continues to manufacture.”

10. How to Talk to People, According to Terry Gross

“Ms. Gross offered her thoughts on how to have a good conversation.”

“The trend is spreading.”

12. How to Up the Spontaneity Quotient on Your Next Trip

“Serendipity is essentially a synonym for good luck, but it’s hardly random.”

“The last Holocaust survivor will most likely die within the next decade or two, and Israel, increasingly since 1967, is a thornbush. American Jews are now back to where they once were: on their own, as they haven’t been in over a century, left to try to sustain themselves.”

14. The Symbiosis Between War and Astrophysics

“From the celestial events that influenced battles in ancient Greece and China, to the indispensable telescopes of the American Civil War, the scientific and military spheres have never been all that separate. Even the founding fathers of astronomy were in dialogue with war makers; Ptolemy published military predictions based on his astronomical knowledge, Galileo secured the patronage of the doge in Venice by touting the military uses of his telescope and Kepler served as the astrologer for a prominent general during the Thirty Years’ War.”

15. Decoding the Story of Yourself

“The most popular tests are those that promise to reveal test takers’ ancestry and identify their relatives — and have the potential to upend our understanding of ourselves. Just imagine what you might find out: Your father is not your dad but actually your dad’s best friend. Or your sister is really your half sister or isn’t your biological sister at all. Or you’re the child of a sperm donor and have 150 half siblings. These and endless other DNA surprises all raise the same question: Are we really who we think we are?”

16. The Future of Aging Just Might Be in Margaritaville

“The fastest-growing segment of the population … is between the ages of 85 and 94.”

“The rise of ‘conversational agents’ is the next great shift in computer interfaces — one arguably as significant as the ‘point-and-click’ interface that emerged in the ’80s.”

18. 20 Americans Die Each Day Waiting for Organs. Can Pigs Save Them?

“He and others on the xenotransplantation frontier believe they are on the cusp of … creating a future in which designer swine, raised in pathogen-free indoor farms, will serve as spare-parts factories for our ailing, aging bodies.”

19. The Human Brain Is a Time Traveler

“In our resting states, we do not rest. Left to its own devices, the human brain resorts to one of its most emblematic tricks, maybe one that helped make us human in the first place. It time-travels.”

“Each new superstorm and superfire forces a reconsideration of the unfashionable, long-discredited view that human beings are, in Descartes’ phrase, ‘the lords and possessors of nature.’ But it is now undeniable that, for better or worse, that is what we have become. Neglect is no less a strategy than cultivation. When we speak about the conservation of nature, we are really talking about a desire to conserve our own human identity: the parts of us that are beautiful and free and holy, those that we want to carry with us into the future. If we don’t, all we’ll have left are holograms of our worst instincts, automatons acting out our nightmares and a slow drift into an inhuman hellscape of biblical dimensions — a tract of solitude and savageness.”

“Today the tradition of the novel has been supplanted by that of the comic book: Stories extend indefinitely, their plot holes patched through superpower, magic and dreams. Or maybe every story is a soap opera now: Nobody dead is dead forever…. Of course, to Hollywood’s bean counters, sequels are mere brand extensions of intellectual property. But something bigger is happening, too: The logic of the internet is colonizing everything.”