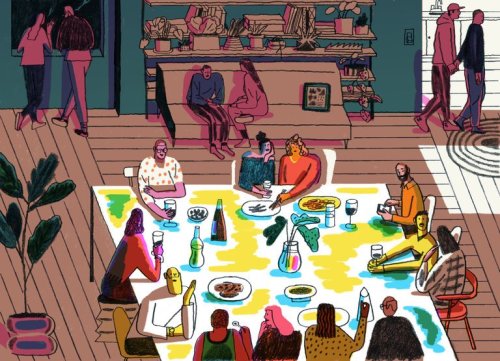 1. For a Better Marriage, Act Like a Single Person

“People who are successful as singles are especially likely to end up in happy marriages, in large part because of the personal and social resources they developed before marrying.”

2. His 2020 Campaign Message: The Robots Are Coming

“Mr. Yang, a former tech executive who started the nonprofit organization Venture for America, believes that automation and advanced artificial intelligence will soon make millions of jobs obsolete — yours, mine, those of our accountants and radiologists and grocery store cashiers. He says America needs to take radical steps to prevent Great Depression-level unemployment and a total societal meltdown, including handing out trillions of dollars in cash.”

3. How Silicon Valley Came to Be a Land of ‘Bros’

“The secret sex parties are just a symptom of a much deeper problem that Silicon Valley’s tech industry has with its treatment of women.”

4. Black With (Some) White Privilege

“What does it mean that many prominent self-identified black people in America today were born to a white parent?”

5. This Is Peak Olympics

“As far as human performance itself, this may be as good as it gets.”

6. Corporations Will Inherit the Earth

“We Americans are living a paradox. We’re keenly suspicious of big corporations — just look at how many voters thrilled to Bernie Sanders’s jeremiads about a corrupt oligarchy, or at polls that show a growing antipathy to capitalism — and yet we’re ever more reliant on them. They’re in turn bolder, egged on by the ineptness and inertia of Washington.”

“What if the problem isn’t simply how their male co-workers behave? What if the problem is the very way society has come to see the jobs themselves? Some jobs are ‘male’ — not just men’s work, but also a core definition of masculinity itself. Threatening that status quo is not just uppity — it can be dangerous.”

8. Single Mothers Are Not the Problem

“Single motherhood is not the reason we have unusually high poverty in the United States, compared with other rich democracies.”

“All I knew was what I was told: College was the ticket to social mobility, and good students deserved to go to schools that matched our talent and ambition. Folks like me, who come from working-class backgrounds, are told to chase down a bachelor’s degree by any means necessary. But no one mentions just how expensive and soul-crushing the debt will be.”

“The Jimmy Buffett lifestyle shakes its fist at the Man even while, Jimmy Buffett, with his 5,000 employees, is basically now the Man.”

“Black Panther is as much an alternative to our contemporary racial discourse as it is a throwback, not only a desire for what could have been but also a nostalgia for what we once had.”

13. Engulfed in the Artificial Audioscape

14. The Sex Toy Shops That Switched On a Feminist Revolution

“The quest for sexual self-knowledge, as two new books on the history and politics of sex toys reveal, would become a driver of feminist social change, striking a blow against men’s overweening insecurity and the attempt (still with us today) to control women’s bodies.”

15. Danielle Steel: ‘I Know an Idea Is Right for Me When It Just Clicks’

“After all these years, Steel continues to use the same 1946 Olympia typewriter she bought used when working on her first book. ‘I am utterly, totally and faithfully in love with my typewriter,’ she says. ‘I think I paid $20 for it. Excellent investment! And by now, we’re old friends.’ She adds, ‘I work for 20 hours at a stretch, glued to my desk, sometimes 24 hours straight. Thirty-six hours once, when I just couldn’t leave the story.’”

16. What I Learned from Watching My iPad’s Slow Death

“My old iPad has revealed itself as a cursed object of a modern sort. It wears out without wearing. It breaks down without breaking. And it will be left for dead before it dies.”

“Try hooting around dusk; owls tend to be nocturnal.”

18. When You’re a ‘Digital Nomad,’ the World Is Your Office

“In the competitive freelance economy, geographic mobility has become a superficial sign of both success and creative freedom: the ability to do anything, anywhere, at any time.”

19. The Towers Came Down, and With Them the Promise of Public Housing

“Virtually no new public housing has been built in the country in decades. There’s still a stock of over a million units nationwide, down from a peak of 1.4 million. Much of it is at risk. A HUD-commissioned study in 2010 found a $26 billion backlog in repair and maintenance needs, a figure estimated to have ballooned since then to more than $50 billion. Each year, some 10,000 to 15,000 units are lost solely because of neglect.”

20. The Rise of China and the Fall of the ‘Free Trade’ Myth

“Economic history reveals that great economic powers have always become great because of activist states. Regardless of the mystical properties claimed for it, the invisible hand of self-interest depends on the visible and often heavy hand of government.”