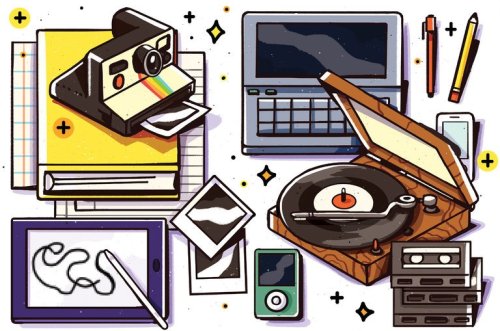 1. Our Love Affair With Digital Is Over

“The limits of analog, which were once seen as a disadvantage, are increasingly one of the benefits people are turning to as a counterweight to the easy manipulation of digital.”

2. When Unpaid Student Loan Bills Mean You Can No Longer Work

“Few people realize that the loans they take out to pay for their education could eventually derail their careers. But in 19 states, government agencies can seize state-issued professional licenses from residents who default on their educational debts. Another state, South Dakota, suspends driver’s licenses, making it nearly impossible for people to get to work.”

3. Azzedine Alaïa, Fashion’s Most Independent Designer, Is Dead at 82

“He rarely hewed to the official show calendar, preferring to reveal his work when he deemed it ready, as opposed to when retailers or the press demanded it. Instead he built his own system, and family of collaborators and supporters, and since the turn of the millennium had become an increasingly important voice for the value of striving to perfect and explore a single proprietary aesthetic, and against giving in to the relentless pressure to produce collections.”

4. Why People in Mississippi Have to Watch the Giants

“On each Sunday during the football season, CBS and Fox broadcast several football games simultaneously, but send only one to your home. The process by which the networks decide which game you will see is called regionalization.”

5. In China, an Education in Dating

“While dating is hard everywhere, it is arguably worse for Chinese men looking for a woman. China’s now-ended one-child policy, carried out in a country with a strong cultural preference for boys, prompted many couples to abort female fetuses. In 2016, there were about 33.6 million more men than women in China.”

6. How Cutting Taxes Makes Life Worse for the Rich

7. What if You Knew Alzheimer’s Was Coming for You?

“Do you want to receive potentially alarming news about your cognitive health, or would you rather not? If you learn that you have a high risk for Alzheimer’s, is that information you will want to keep private — from employers, clients, health insurers and others? Or will you want to openly embrace it as part of your identity and publicly advocate for a cure?”

“Hour by hour, minute by minute, I make decisions that seem like the right things to do at the time, but which prevent me from reflecting on the most significant, most critical fact in my life: Every day I participate in a system that is weaponizing our big, gorgeous planet against our kids.”

9. Thanksgiving Nutrition Tips: Eat Whatever You Want, but Not That

“This revolutionary nutrition concept has only one rule: Eat what you want when you’re hungry and don’t eat when you’re not hungry.”

“What could be more logical than taxpayers’ patriotic plea that their federal, state and municipal governments consider removing, from public property, tributes to traitors loyal to the Confederate States of America who took up arms against the United States to perpetuate the institution of slavery?”

“Trumpism is not Stalinism, but the relevance of Milosz’s insights — that intellectuals yearn to ‘belong to the masses’; that there is never a shortage of ways to justify cruelty in the name of the presumptively higher truth; that those who refuse to conform are caricatured as self-righteous purists — continues to haunt me as I watch so many I used to admire offer ever-more contorted defenses of Trumpism.”

“We found that one in five of the coalition strikes we identified resulted in civilian death, a rate more than 31 times that acknowledged by the coalition. It is at such a distance from official claims that, in terms of civilian deaths, this may be the least transparent war in recent American history.”