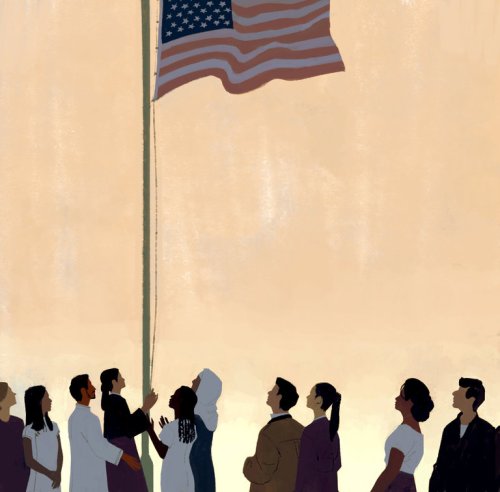 1. The Transformation of the ‘American Dream’

“In the 1930s and ’40s, the term appeared occasionally in advertisements for intellectual products: plays, books and church sermons, book reviews and high-minded articles. During these years, it rarely, if ever, referred to business success or homeownership.”

2. The Secret Life of the City Banana

“You don’t want to stress the bananas.”

3. The Policies of White Resentment

“White resentment needs the boogeyman of job-taking, maiden-ravaging, tax-evading, criminally inclined others to justify the policies that thwart the upward mobility and success of people of color.”

4. America Is Running Out of Bomb-Sniffing Dogs

“Despite decades of trying, researchers have yet to develop a machine as exquisitely sensitive and discerning as a dog’s nose.”

5. On a Date While Venezuela Burns

“What do you talk about on a date when your country is collapsing?”

6. Racial Violence on the Screen

“White America is connected, whether it wishes to be or not, to a history that has shot and lynched black folk into silence. When visual evidence of police brutality circulates widely, it is a warning to black folk to keep in place.”

7. The Pianist Jeremy Denk on the Joys of Chopin, Our Most Catlike Composer

“He frequently writes the act of listening into the music, aware that somehow composing a good phrase is only half the job, and the beauty of moments must be given space to sink in.”

8. An Encore for the Native Americans Who Shook Up Rock ‘n’ Roll

“The film reveals how Native American rhythms and stylings became a part of the larger tapestry of American music.”

9. What’s So Hard About Casting Indian Actors in Indian Roles?

“When vetting is a challenge even for tribes, which can become embroiled in controversies over identity, how can casting directors do it? Physical appearance can be deceiving, and requiring tribal membership may exclude those who are not enrolled.”

“If someone uses another’s work for commercial purposes … it becomes much easier for the owner of the content to file a cease-and-desist order or to argue that compensation is necessary.”

12. How to Conquer the Admissions Essay

“Don’t brag about your achievements. Instead, look at times you’ve struggled or, even better, failed. Failure is essayistic gold. Figure out what you’ve learned. Write about that. Be honest and say the hardest things you can. And remember those exhausted admissions officers sitting around a table in the winter. Jolt them out of their sugar coma and give them something to be excited about.”

13. In the Era of Digital Composition, What Should a Writer Keep?

“Some writers keep every draft; others keep just one. But there are many points on the line between those two extremes.”

14. If SoundCloud Disappears, What Happens to Its Music Culture?

“The death of SoundCloud … would mean more than the sunsetting of a service: It could mean the erasure of a decade of internet sound culture.”

“Ghosting … provides a line of flight. Freed from the ties that hurt us, or bore us, or make us feel uneasy, finally we can turn our attention inward.”

16. The Loyal Engineers Steering NASA’s Voyager Probes Across the Universe

“They also may be the last people left on the planet who can operate the spacecraft’s onboard computers, which have 235,000 times less memory and 175,000 times less speed than a 16-gigabyte smartphone.”

17. Losing It in the Anti-Dieting Age

“If you had been watching closely, you could see that the change had come slowly. ‘Dieting; was now considered tacky. It was anti-feminist. It was arcane. In the new millennium, all bodies should be accepted, and any inclination to change a body was proof of a lack of acceptance of it.”