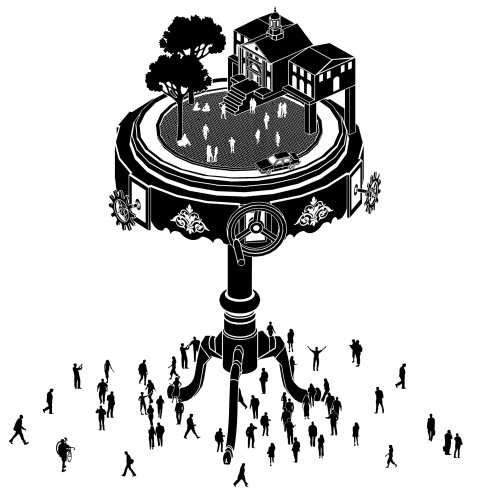 “The rhetoric of ‘We are the 99 percent’ has in fact been dangerously self-serving, allowing people with healthy six-figure incomes to convince themselves that they are somehow in the same economic boat as ordinary Americans, and that it is just the so-called super rich who are to blame for inequality.”

“Enough fentanyl to get nearly 50,000 people high can fit in a standard first-class envelope.”

3. Religious Liberals Sat Out of Politics for 40 Years. Now They Want in the Game.

“Across the country, religious leaders whose politics fall to the left of center, and who used to shun the political arena, are getting involved — and even recruiting political candidates — to fight back against President Trump’s policies on immigration, health care, poverty and the environment.”

4. Paying a Price for 8 Days of Flying in America

“To understand the forces defining air travel in America today, I spent eight days crisscrossing the country in economy class. Four airlines. Twelve flights (half of them delayed). Twelve cities. Twelve cups of tomato juice. Three trips through whole-body scanners. One alarming use of the words “groin area.” Eight testy conversations with authority figures. One lost bag. Two broken entertainment systems. And a reporter who went a week without washing her hair.”

5. Why Women Don’t See Themselves as Entrepreneurs

“Research shows that women around the world are less likely to consider entrepreneurship as a career path, largely because they don’t see other women entrepreneurs as role models.”

6. Ending the Curse of Remedial Math

“Nationwide, only 35 percent of those who start community college receive any form of credential within six years. At urban community colleges, the six-year graduation rate is only 16 percent.”

7. America Made Me a Feminist

“In America, a woman’s body seemed to belong to everybody but herself. Her sexuality belonged to her husband, her opinion of herself belonged to her social circles, and her uterus belonged to the government. She was supposed to be a mother and a lover and a career woman (at a fraction of the pay) while remaining perpetually youthful and slim. In America, important men were desirable. Important women had to be desirable. That got to me.”

“While we’re sure almost everyone will agree with our choices, we’re equally sure that those of you who don’t will let us know.”

9. Prozac Nation Is Now the United States of Xanax

“While to epidemiologists both disorders are medical conditions, anxiety is starting to seem like a sociological condition, too: a shared cultural experience that feeds on alarmist CNN graphics and metastasizes through social media.”

“People tend to have creative insights when they are in a positive, relaxed mood. When they are anxious, their thinking narrows and becomes analytical and cautious.”

“The dog senses when his agitation and anxiety begin rising, and sends him signals to begin the controlled breathing and other exercises that help to calm him down.”

12. Better Health Through the ‘Lassie Effect’

“Even though walking the dog can have lifesaving health benefits for owners and pets, a surprisingly large number of dog owners rarely, if ever, walk or otherwise exercise their dogs.”

13. Critical Thinkers: The Ties That Bind Orwell and Churchill

“Neither followed the crowd. Each treated popularity and rejection with equal skepticism. Their unwavering independence, Ricks concludes, put them in ‘a long but direct line from Aristotle and Archimedes to Locke, Hume, Mill and Darwin, and from there through Orwell and Churchill to the “Letter from Birmingham City Jail.” It is the agreement that objective reality exists, that people of good will can perceive it and that other people will change their views when presented with the facts of the matter.’”

“One reason art tends to come from looking outward and not just inward is that we’re always speaking from a shaky authority, even when narrating our own experiences — maybe especially when narrating just ourselves. To be entirely against taking anything from another culture would be to condemn everything to memoir — and of all the genres of literature, I think memoir deserves the reputation for being the least true.”

15. How Did ‘Witch Hunt’ Become the Complaint of the Powerful?

“The central paradox of modern witch hunts is that those who claim to be the victims … are often the ones most enthusiastic about carrying them out.”

16. The Internet Is Where We Share — and Steal — the Best Ideas

“The internet has become the go-to place to toss out ideas, in the hope that they could lead to a job, but it has also become the place where people go to find the best ideas, creating a lopsided dynamic that tends to benefit people in power.”

“When the traditional signs of adulthood — marriage, homeownership, children — are delayed or otherwise out of reach, it’s comforting to come home to something that depends on you.”

18. The Bounty Hunter of Wall Street

“In the finance world, Left, 46, is what is known as an ‘activist’ short-seller. After he places a bet against the price of a stock, he then publishes research designed to torpedo the company’s value, often by airing accusations of fraud or abuse.”

“If current rates continue, one in two African-American gay and bisexual men will be infected with the virus.”