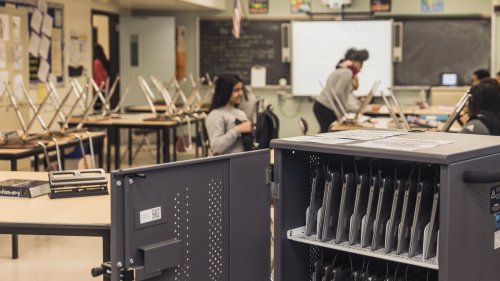 1. How Google Took Over the Classroom

“Schools may be giving Google more than they are getting: generations of future customers.”

2. With New Digital Tools, Even Nonexperts Can Wage Cyberattacks

“Now anyone can visit a web page, generate a ransomware file with the click of a mouse, encrypt someone’s systems and demand a ransom to restore access to the files. If the victim pays, the ransomware provider takes a cut of the payment.”

“Explaining the rules of professional interaction is not an act of condescension; it’s the first step in treating students like adults.”

4. If Liberals Hate Him, Then Trump Must Be Doing Something Right

“Mr. Trump’s most vocal supporters don’t have to defend his specific actions as long as they make liberal heads explode.”

5. The Census and Right-Wing Hysteria

“Whites are already seeing the descendants of some Asian and Latino immigrants as being similar to them. Consequently, whites treat them as white. This ‘whitening’ process will only increase in the future.”

6. Aziz Ansari on the Return of ‘Master of None’ and that ‘S.N.L.’ Monologue

“You always hear that people come up with ideas in the shower — when I live in these places, it’s like living my whole life in the shower.”

7. The Rich, Famous and Oh So Vulnerable

“Almost all celebrities aim for an impregnable public image, one that can hold up to any assault. But in this era of 24-7-365 mythmaking, the most visionary ones understand the value and uses of weakness, too.”

8. Where, Oh Where, Has My Little Dog Gone? Refresh Your Feeds

“An animal is lost. A message or picture is broadcast on social media. Hundreds of concerned ‘friends’ — some you may not have heard from since the 2016 presidential election — will repost on Instagram or retweet a lost pet notice without hesitation. The same fur fervor that causes people to mourn helplessly the death of Cecil the Lion, watch a runaway llama or consider depressed pandas at the zoo is in these cases channeled into helpful community activity rather than selfies.”

9. Solving a Reign of Terror Against Native Americans

“Among the towering thefts and crimes visited upon the native peoples of the continent, what was done to the Osage must rank among the most depraved and ignoble.”

10. How Privacy Became a Commodity for the Rich and Powerful

“Data-mining companies know everything about us, but we know very little about what they know. And just as ‘privacy’ has grown into an anxious buzzword, the powerful have co-opted it in order to maintain control over others and evade accountability. As we bargain away the amount of privacy that an ordinary person expects, we’ve also watched businesses and government figures grow ever more indignant about their own need to be left alone.”

“Beyond identifying the type of predator, prairie-dog calls also specified its size, shape, color and speed; the animals could even combine the structural elements of their calls in novel ways to describe something they had never seen before. No scientist had ever put forward such a thorough guide to the native tongue of a wild species or discovered one so intricate. Prairie-dog communication is so complex, Slobodchikoff says — so expressive and rich in information — that it constitutes nothing less than language.”

12. Is an Open Marriage a Happier Marriage?

“Divorce, or not marrying in the first place, might seem like a more logical response to a desire for openness. But even as marriage rates have declined in this country, the institution has retained a seductive status for Americans. In his 2010 book, The Marriage-Go-Round, Andrew J. Cherlin, a sociologist at Johns Hopkins University, argues that Americans, who are more religious than their counterparts in other wealthy, developed nations, are also more infatuated with marriage. And yet the tradition is nonetheless at odds, he argues, with the country’s emphasis on individualism, a tension that leads to high rates of divorce but also to remarriage, with worrisome outcomes for finances and children. Openness in a marriage, for better or for worse, would seem a natural outgrowth of those conflicting cultural values, especially since same-sex marriage, open adoptions, single-parent homes, and ideas about gender fluidity have already redefined what constitutes a family.”

13. How Homeownership Became the Engine of American Inequality

“Because of rising housing costs and stagnant wages, slightly more than half of all poor renting families in the country spend more than 50 percent of their income on housing costs, and at least one in four spends more than 70 percent. Yet America’s national housing policy gives affluent homeowners large benefits; middle-class homeowners, smaller benefits; and most renters, who are disproportionately poor, nothing. It is difficult to think of another social policy that more successfully multiplies America’s inequality in such a sweeping fashion.”