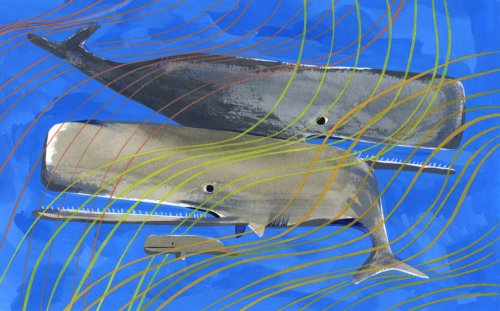 1. The Lost Cultures of Whales

“We are not just losing specific whales that we have come to know as individuals; we are losing a way of life, a culture — the accumulated wisdom of generations on how to survive in the deep waters of the Caribbean Sea. They may have lived here for longer than we have walked upright.”

2. How U.S. Torture Left a Legacy of Damaged Minds

“After enduring agonizing treatment in secret C.I.A. prisons around the world or coercive practices at the military detention camp at Guantánamo Bay, Cuba, dozens of detainees developed persistent mental health problems, according to previously undisclosed medical records, government documents and interviews with former prisoners and military and civilian doctors. Some emerged with the same symptoms as American prisoners of war who were brutalized decades earlier by some of the world’s cruelest regimes.”

3. When the Next Hurricane Hits Texas

“Climate change is hard to think about not only because it’s complex and politically contentious, not only because it’s cognitively almost impossible to keep in mind the intricate relationships that tie together an oil well in Venezuela, Siberian permafrost, Saudi F-15s bombing a Yemeni wedding, subsidence along the Jersey Shore, albedo effect near Kangerlussuaq, the Pacific Decadal Oscillation, the polar vortex, shampoo, California cattle, the Great Pacific Garbage Patch, leukemia, plastic, paper, the Sixth Extinction, Zika, and the basic decisions we make every day, are forced to make every day, in a world we didn’t choose but were thrown into. No, it’s not just because it’s mind-bendingly difficult to connect the dots. Climate change is hard to think about because it’s depressing and scary.”

“As the play conceives it, Richard’s villainy was readily apparent to everyone. There was no secret about his fathomless cynicism, cruelty and treacherousness, no glimpse of anything redeemable in him and no reason to believe that he could govern the country effectively.”

“The liberal consensus seemed impressively resilient, even in the midst of elite misgovernment. 9/11 did not shake it meaningfully, nor did the Iraq war, and it seemed at first to weather the financial crisis as well. Now, though, there is suddenly resistance.”

6. Pets on Pot: The Newest Customer Base for Medical Marijuana

“Other animal lovers who have turned to cannabis-based products to alleviate a host of pet maladies, including seizures, inflammation, anxiety and pain, are reporting similar results. Although they have not been approved by regulators, marijuana-based treatments are being used not only for cats and dogs, but for pigs, horses and domesticated wild animals.”

7. Founder of Overheard LA, Which Pokes Fun at the City’s Pretensions, Is Unmasked

“A lot of the trends start here — hot Pilates, aura photography — and a lot of culture gets exported from here. Or anti-culture. People all over the world see the Kardashians in Calabasas, ‘The Price Is Right’ from the CBS studios on Beverly Boulevard. At the end of the day, they care about Los Angeles because it represents an ideal reality. It’s where the myths have been made for the last hundred years.”

“Some cities have a single architectural identity but Los Angeles is known for many. It was an incubator of the American Craftsman style, and it embraced Beaux-Arts, as well as Spanish Colonial Revival and Mayan Revival, which found a powerful advocate in Frank Lloyd Wright. But then Art Deco arrived and proliferated during the decades when movie studios became the cornerstone of an economy that had previously relied primarily on oil. It left a stunning cache of public buildings in its wake.”

“Some years back it ran a piece in praise of short words, entirely in words of one syllable. The guiding principle of its style — simplify, then exaggerate — suits writers of polemics, operas and much else.”

“The most disturbing stories about the future may be less about what could happen, given unforeseen circumstances, and more about what should happen given the way things are right now.”

11. The Populist Explosion Dissects the History of the Anti-Elite Worldview

“The difference is that right-wing populists accuse the elite of coddling an ever-shifting third group — immigrants, blacks, terrorists, welfare recipients or all of the above. This demagoguing of the scapegoat du jour is what gives right-wing populism its current potency, especially in Europe, which is facing more severe economic, immigration and terrorism problems than the United States.”

“In the past half-century there has been no figure more dominant or more controversial in American law than Posner. He has written more than 50 books, over 500 articles and nearly 3,000 majority opinions for his court. Not even Supreme Court Justice Oliver Wendell Holmes Jr. — to whom he is often compared — matches his productivity and range.”

13. In Exile With Don Quixote

“The defining experience of Cervantes’s life was the harrowing five years starting in 1575 that he spent in the dungeons of Algiers as a prisoner of the Barbary pirates. It was there, on the border of Islam and the West, that Cervantes came to appreciate the value of tolerance toward those who are radically different, and it was there he discovered that of all the goods men can aspire to, freedom is by far the greatest. While awaiting a ransom that his family could not pay, confronted with execution each time he attempted to escape, watching his fellow slaves tormented and impaled, he longed for a life without manacles. But once he returned to Spain, a crippled war veteran neglected by those who had sent him into conflict, he came to the conclusion that if we cannot heal the misfortunes that assail our bodies, we can, however, hold sway over how our soul responds to those sorrows.”

“All of this is wonderful, if you like your connections eclectic and your narrative discursive.”

15. Why Are Politicians So Obsessed With Manufacturing?

“This myopic focus on factory jobs distracts from another, simpler way to help working Americans: Improve the conditions of the work they actually do.”

16. Letter of Recommendation: The Life of Marshall Hodgson

“Born in 1922, he spent World War II as a conscientious objector in the Civilian Public Service before he made his way to academia. Legends circulated: He couldn’t eat a bun in a German cafe because there were hungry people outside; for a time, he subsisted on raw potatoes. He held tutorials while jogging briskly around the track. He wrote treatises, cranky or inspired, on grading policies, university housing, world federalism, civil rights. He read War and Peace to his wife, Phyllis, while she washed dishes. (‘Marshall didn’t think a university professor ought to wash dishes,’ she told me wryly — one grave mark against him.) Hodgson read and wrote furiously but published little. The Venture is the main offering, and even it was unfinished by his standards at the time of his death.”

“In ways small and large, Obama left the distinct impression during the campaign that he grasped the food movement’s critique of the food system and shared its aspirations for reforming it. But aspirations are cheap — and naïveté can be expensive.”

“When picking among shrink-wrapped packages in the meat aisle of your local grocery, it’s remarkable how little information you’re provided about the steak, pork chop or chicken breast inside. The label tells you the particular cut, its weight and the price per pound, but store brands almost never give even basic information about how that animal was raised.”

“Can frozen pizza really be expected to improve the health of the American public? And will anyone want to eat it if it does?”