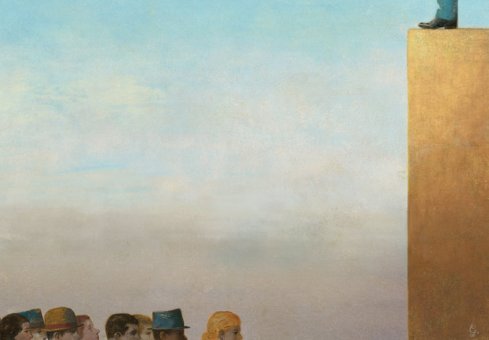 “It appears that a clear majority of Americans will experience poverty.”

2. Elliot Gant, Marketer of the Button-Down Shirt, Dies at 89

“The Gants transformed the button-down into a mass-market must. Within decades the shirt had become so universal, as much a uniform of the day as the proverbial gray flannel suit, that the comedian Bob Newhart was riffing on Madison Avenue’s ‘button-down mind.’”

“Global trade has produced big gains for Americans, like more affordable goods — clothes, computers, even air-conditioners — and led to a more advanced economy. At the same time, a chronic trade deficit and an overvalued dollar have caused factory jobs to dry up, contributing to a deep divide between the political and economic elite and the rest of the nation. Perhaps a clash was inevitable.”

4. As Women Take Over a Male-Dominated Field, the Pay Drops

“What if we spoke to kids about sex more instead of less, what if we could normalize it, integrate it into everyday life and shift our thinking in the ways that we (mostly) have about women’s public roles? Because the truth is, the more frankly and fully teachers, parents and doctors talk to young people about sexuality, the more likely kids are both to delay sexual activity and to behave responsibly and ethically when they do engage in it.”

“It’s only a car, and there’s no point in being sentimental. After all, the universe is organized around the principle of entropy. Systems decay, institutions and landmarks we took for granted vanish, swept over a precipice: the Saturn brand, the Republican Party, the glaciers of Greenland.”

7. How a Fitbit May Make You a Bit Fit

“Is the data we collect with these devices actually useful?”

“The organization is a Remington typewriter in a smartphone world.”

9. The Hidden Price of Mindfulness Inc.

“If mindfulness can be bought as easily as a pair of Lululemon yoga pants, can it truly be a transformative practice that eases the troubled mind?”

“It’s not surprising that Buck v. Bell was decided in the Roaring Twenties, a decade even more culturally charged than the one we live in today. The Ku Klux Klan was riding a wave of anti-Catholic, anti-Semitic fervor, creationists were battling Darwinists over the teaching of evolution, and Prohibition was pitting rural Protestant values and prejudices against a looser, more diverse urban culture. In Washington, Congress was busily writing the most restrictive immigration law in our history, the National Origins Act, to protect the country from foreign contamination.… [T]he driving force behind this and other such laws came from progressives in the halls of academia.”

“It was pretty brutal up until I was 40, but then I refused to accept any of the frequently offered jobs teaching writing. I believed someone should stay outside of academia. We scraped by on occasional journalism.”

13. The Lonely City, by Olivia Laing

“This daring and seductive book — ostensibly about four artists, but actually about the universal struggle to be known — raises sophisticated questions about the experience of loneliness, a state that in a crowded city provides an ‘uneasy combination of separation and exposure.’”

14. The Road Taken, by Henry Petroski

“This little-things perspective is needed at a time when America’s infrastructure agenda is simultaneously characterized by grandiose ambitions and limited budgets. Money is tight, and infrastructure needs are going unaddressed. At the same time, despite funding limitations, politicians have a tendency to fall in love with novel, pathbreaking, expensive projects that frequently go astray, resulting in arguments against spending more on infrastructure.”

“At their first meeting, Malcolm X didn’t know who Clay was. But from the start, ‘Malcolm had magnetized Clay, drawing him toward the inner circle of the Nation.’ Within months, the fighter and the minister who was famous for the line ‘by any means necessary’ were orbiting each other.”

16. The Secrets of the Wave Pilots

“All maps are but representations of reality: They render the physical world in symbols and highlight important relationships — the proximity of one subway stop to another, say — that are invisible to the naked eye. If storytelling, the way we structure and make meaning from the events of our lives, arose from navigating, so, too, is the practice of navigation inherently bound up with storytelling, in all its subjectivity.”

“Because a boxer is trained to sustain pain, to absorb it, to let it happen and let it go. And that’s a very important skill to have in life. Because you will get hit.”

18. The Ever-Evolving Typographic Life of the Arabic Language

“Like all design objects, letters too are inherently ideological.”

19. In the Home, Blah Is Beautiful

“Like parchment or sackcloth, there is a paradoxical luxury in materials and colors that present themselves as a sturdy backdrop for better, shinier things.”

“The shop is a particularly sleek and modern manifestation of precycling, the concept of eliminating trash before it is created. If you don’t use new plastic, paper or metal to begin with, you won’t have to dispose of it.”

“My studio is no more than enclosed emptiness, a cube of uncluttered quiet warmth in which I can collect my thoughts and try to marshal them into that difficult form called the novel. I have no books; I’m there to write, not to read.”