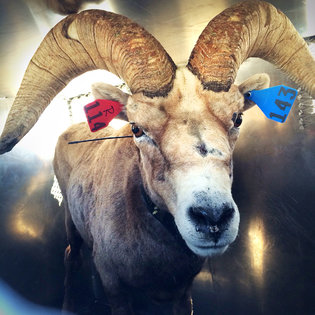 “We approach that perhaps inevitable time when every predator-prey interaction, every live birth and every death in every species supported by the terrestrial biosphere, will be monitored and manipulated by the human hive mind.”

“That evening of public abasement, rather than sending Mr. Trump away, accelerated his ferocious efforts to gain stature within the political world. And it captured the degree to which Mr. Trump’s campaign is driven by a deep yearning sometimes obscured by his bluster and bragging: a desire to be taken seriously.”

“It is a particularly modern solution to a medieval injunction: According to an obscure ruling in Islamic law cited by the Islamic State, a man must ensure that the woman he enslaves is free of child before having intercourse with her.”

“If the Apple dispute is akin to whether the F.B.I. can unlock your front door and search your house, the issue with WhatsApp is whether it can listen to your phone calls. In the era of encryption, neither question has a clear answer.”

“Once they became a couple, she restored Reagan’s self-confidence and, as was the case throughout their married life, gave him shrewd tactical advice.”

6. Which Side Are You On, Hillary?

“Mrs. Clinton’s troubles with labor began before she arrived in Washington.”

7. Should All Research Papers Be Free?

8. The Global Solution to Extinction

“Unless we wish to pauperize the natural world drastically and permanently, believing that later generations will be smart enough to find a way to bring equilibrium to the land, seas and air, then we, the current inheritors of this beautiful world, must take more serious action to preserve the rest of life.”

“Three million users have already deployed some aspect of the breakup flow, as it’s called, by choosing to minimize what they see of an ex going forward, and similarly hide their own postings, settings that can easily be reversed if the future brings a change of heart or a dulling of the ache.”

“His style was essential to his substance.”

11. Wendell Berry: By the Book

“A good book in any genre is a good book.”

“One of the great tricks of pop music is that no matter how much we like to imagine it’s about musicians expressing themselves, it tends to be more useful as a way for listeners to figure out their own identities: Each song lets us try on a new way of being in the world.”