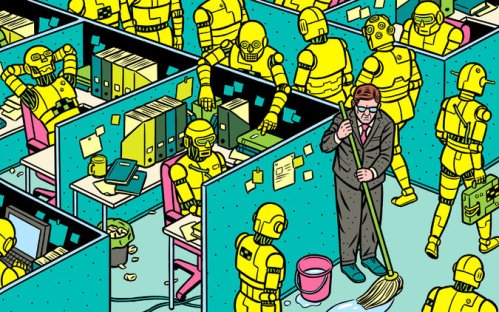 1. Rise of the Robots and Shadow Work

“The disappearance of jobs has not ushered in a new age of leisure, as social theorists predicted uneasily in the 1950s. Would the masses utilize their freedom from labor in productive ways, such as civic participation and the arts, or would they die of boredom in their ranch houses? Somehow, it was usually assumed, they would still manage to eat.”

2. Don’t Be So Sure the Economy Will Return to Normal

“Are these economic problems transitory, or are we glimpsing the beginnings of a grimmer future?”

“Under the federal program, a foreigner who invests $500,000 — and in some instances, $1 million — in a project that will create at least 10 jobs can apply for a green card. It generally takes from 22 to 26 months to obtain legal residency through the program, as opposed to several years for other visa programs.”

“It didn’t take long for me to realize that my background in anthropology might help me figure it all out, and that this elite tribe and its practices made for a fascinating story.”

5. No Longer Wanting to Die

“This dialectic tension between acceptance and change is the root concept of dialectical behavior therapy.”

“Like the D.M.V. and jury duty, the post office is one of the last great equalizing institutions.”

7. Thou Shalt Worship None of the Above

“To live in a country as pluralistic as the United States is inevitably to be influenced by a grab bag of beliefs. ‘Thou shalt reconsider assumptions you held as a child and remain open to new ideas’ might as well be the first commandment of our national faith.”

8. Let the Kids Learn Through Play

“Play is often perceived as immature behavior that doesn’t achieve anything, but it’s essential to their development. They need to learn to persevere, to control attention, to control emotions. Kids learn these things through playing.”

9. What’s Lurking Behind the Suicides?

“What the news media often misses though, and what tribal members understand but rarely discuss above a whisper, is that youth suicides here are inextricably linked to a multigenerational scourge of sexual abuse, with investigations into possible abuse now open in at least two of the nine recent suicides.”

10. Mounting Evidence of Advantages for Children of Working Mothers

“Evidence is mounting that having a working mother has some economic, educational and social benefits for children of both sexes.”

“Curious things happen when people begin to pull themselves out of a rut. Some friends and family members will say they always knew things would turn around. Some will take credit. For others, the memory of the way the person was before, the slights, the insults and the sheer embarrassment of witnessing someone so low will always be what they remember.”

“What does consistently work may be surprising: interventions based not on money, but on leveraging social concerns.”

“They bought 63 acres for $63,000 in Pitman, a tiny community in Eldred Township, and they began to rescue period cabins and structures in the area and move them to the site. Filled with Colonial zeal, they bought an antique letterpress and began printing brochures to advertise their concept. Dressed in their homespun linen garments, made from flax they had planted and sewn themselves, they set up tables at gay-pride festivals, living-history farms and farming museums. ‘People would look at us and say, “Oh, so you’re gay Amish?”’ Johannes said. They did get a few takers: a man who was interested in the culture of the early German settlers, but preferred to observe its customs rather than pitch in; a guy they called ‘the Primitive man,’ who set up a lean-to on the property and wore loincloths in the summer (he stayed the longest but turned out to be mentally ill).”

14. For Brittney Griner and Glory Johnson, a Complicated Match Made on the Hardwood

“Even those of us who don’t have small children or jobs with the State Department, it seems, now need to be accessible at all hours of the day. It’s as if we’re doctors on call.”

16. Swearing Off the Modern Man

“If a spouse or partner can’t leave work, has a conflict, or is disinterested in a destination that his or her partner is pining to see, the partners have no qualms about heading off on their own.”

“I think The Scarlet Letter is the great morality tale in American literature that defies all merely moralistic categories. With Gatsby it’s all about style. I try to reread it every summer for rhythm and flow. When I was younger I would have picked Hemingway, especially the Nick Adams stories during trout season, but he’s faded as I’ve aged.”

“Musk is brutal on himself, routinely working 100-hour weeks. He is brutal as a boss, too, often berating or summarily firing colleagues while hogging credit for others’ accomplishments. Yet he is without question a leader who pushes risky ideas forward through a combination of long-range vision and deep technical intelligence. He knows how to hire good people and how to motivate them. Most important, he never, ever gives up.”

“The emergent field of narrative medicine, in which a patient’s life story is elicited in order that his immediate health crisis may be addressed, in many ways reflects Sacks’ belief that a patient may know more about his condition than those treating him do, and that doctors’ ability to listen can therefore outrank technical erudition. Common standards of physician neutrality are in Sacks’ view cold and unforgiving — a trespass not merely against a patient’s wish for loving care, but also against efficacy. Sacks has insisted for decades that symptoms are often not what they seem, and that while specialization allows the refinement of expertise, it should never replace the generalism that connects the dots, nor thwart the tenderness that good doctoring requires.”

“The cornucopia of technology that we are accepting into our lives, with little or no self-reflection or thoughtful examination, may very well come back and bite us.”

“At Audible, arguably the premier venue for audiobooks, poetry represents around half a percent of the total offerings, and Audible itself has produced only 35 or so poetry audiobooks, as against their nearly 23,000 recordings in other genres. The numbers at Audible’s competitors are similarly discouraging for poets. Among more than 11,000 available titles at Audiobooks and more than 30,000 at Scribd, only a fraction are poetry collections.”

“Adler made her name covering many of the same subjects as her peers — the civil rights movement in the South, the hippies in California, the New Left — from a contrarian perspective she called the ‘radical middle.’”

24. Goebbels: A Biography, by Peter Longerich

“Goebbels’s path to his death in the bunker below the ruins of Hitler’s Chancellery began in 1924, when he became a founding member of a chapter of the National Socialist Workers Party in his hometown, Rheydt, a small city in the Rhineland, not far from Düsseldorf. That year Goebbels turned 27 years old, without past accomplishments or future prospects: unmarried, unemployed and still living at home, he was the author of an unpublished doctoral dissertation on a deservedly obscure German writer and a few unfinished works of autobiographical fiction.”

“Kruse tells a big and important story about the mingling of religiosity and politics since the 1930s. Still, he oversells his basic premise. Americans easily accepted placing God’s name on their currency and in the oath children recite every school day because similar invocations were already routine in public discourse — from the Declaration’s reference to the ‘unalienable Rights’ endowed by the ‘Creator’ to the official chaplains who have opened sessions of the House and Senate with a prayer since 1789. Following the attacks of 9/11, we’ve added the ubiquitous ‘God Bless America’ to bumper stickers, to the ends of political speeches and to many a seventh-inning stretch. As features of what the sociologist Robert Bellah called ‘civil religion’ (a term he borrowed from Rousseau), the familiarity of these practices comforts some without making particular demands on anyone else. Even back in the age of Eisenhower, the A.C.L.U. understood that.”

26. The Underground Art of the Insult

“At its most refined, shade should have an element of plausible deniability, so that the shade-thrower can pretend that he or she didn’t actually mean to behave with incivility, making it all the more delicious.”

“Many of these videos simply help viewers learn professional makeup techniques at home: the angular wings of a cat-eye, say, or smoky eyes just like Kim Kardashian’s. But with those basics covered, the ironclad law of web content — that there must always be more — has now brought us tutorials that go beyond these utilitarian roots and into territory that is artsier, weirder and far more subversive.”

28. Leaving It All Behind

“I will give up all vehicles, mobile phones, cosmetics, colorful clothes, footwear, money, ornaments. Renouncers can have only white clothes, just a few of them. You are allowed to own only books about Jain religion, a bowl in which we can eat food and the broom we use to clear the path that we walk on.”

“They are marquee stars of urban fiction, or street lit, a genre whose inner-city settings and lurid mix of crime, sex and sensationalism have earned it comparisons to gangsta rap. The emergence of street lit is one of the big stories in recent American publishing, a juggernaut that has generated huge sales by catering to a readership — young, black and, for the most part, female — that historically has been ill-served by the book business. But the genre is also widely maligned. Street lit is subject to a kind of triple snobbery: scorned by literati who look down on genre fiction generally, ignored by a white publishing establishment that remains largely indifferent to black books and disparaged by African-American intellectuals for poor writing, coarse values and trafficking in racial stereotypes.”

“A very small sampling of the female artists now in their 80s and 90s we should have known about decades ago.”