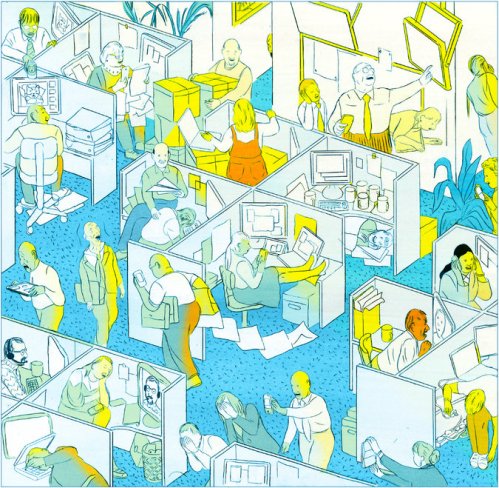 1. Why You Hate Work

“For most of us … work is a depleting, dispiriting experience, and in some obvious ways, it’s getting worse.”

“She also declined to say whether the N.S.A. collected facial imagery of Americans from Facebook and other social media through means other than communications intercepts.”

“One of the students, Theron Smith, serving time on a second-degree murder conviction, noted that Freire’s work called to mind Hegel and the theory of double consciousness. Mr. Smith is an avid consumer of sociological texts; his longtime friend Rowland Davis, next to him in class that day, has immersed himself in theology. Another student had been creating an elaborately illustrated graphic novel.”

“He has changed his school’s incentive structure, which, as in most of academia, was based primarily on the number of research articles published in elite journals. Now professors who can’t crack those journals but ‘have a gift for inspiring learning,’ he said, in person or online, are being paid as top performers, too.”

5. The Enduring Promise of a Thinner You

“Body-conscious consumers often jump on the latest technology that promises easy slimming, only to discard it for the next thinning gimmick. Inventions advertised as new technology to whittle waistlines have been around for decades. Vibrating belts were introduced in the 1920s, and massage rolling machines in the ’40s.”

6. Financial Hazards of the Fugitive Life

“For all the recent talk of a surveillance state created through the National Security Agency, an oppressive low-tech surveillance state has been in place for decades — and it’s been directed at many of America’s poorest people.”

7. Unlocking Secrets, if Not Its Own Value

“The technology is complex, but the premise is simple: The software consumes huge amounts of data — from local rainfall totals to bank transactions — mashes it together and makes conclusions based on those unlikely combinations. Where is a terrorist attack likely to occur? What is a bad financial bet?”

“Households like this — middle-income in terms of earnings but paying at least 30 percent of those earnings for housing — perch on the knife edge between hope and anxiety. Even as their housing costs mount, they struggle to hang onto their apartments because they know that their options can only narrow.”

9. The Wild Children of Yesteryear

“American children of the 19th century had a reputation. Returning British visitors reported on American kids who showed no respect, who swore and fought, who appeared — at age 10 — ‘calling for liquor at the bar, or puffing a cigar in the streets,’ as one wrote. There were really no children in 19th-century America, travelers often claimed, only ‘small stuck-up caricatures of men and women.’”

10. How to Get Girls Into Coding

“Girls know the stereotype of a geeky guy hacker in his basement all too well, and interacting with women who use computer science in their professional lives gives them an idea of something to go after besides an endless string of code.”

“Our get-tough turn didn’t just send millions of African-American men to prison and return them home with felony convictions. It expanded the scope of policing and court supervision in poor black neighborhoods, radically altering the way life is lived there.”

12. Lessons From the Smoke Shop

“Just remember: Ask first, don’t grab, be fair, say please and thank you, always say thank you — even if you don’t get something back right away. You will.”

13. The Day of Forgetting

“A person can function, ask questions, only when he recognizes a fundamental link between circumstances and time, past and present. The links between something happening to you, leading you to do or say something, which leads to someone else responding. No act is without an act leading up to it, no word is without a word that came before.”

14. Our Flinching State of Mind

“Our associations with fast food can induce greater impatience.”

“As sex looms ever larger as an aspirational good, we also live in a society where more people are single and likely to remain so than in any previous era. And since single people have, on average, a lot less sex than the partnered and wedded, a growing number of Americans are statistically guaranteed to feel that they’re not living up to the culture’s standard of fulfillment, happiness and worth.”

“So much media attention has focused on the multibillion-dollar suburban campuses by celebrity designers in Silicon Valley, among them Norman Foster’s doughnut-shaped headquarters for Apple, that adaptive reuse has pretty much slipped under the radar.”

18. Master of the Game (Diploma Says So)

“Last month, the first graduates of a new M.F.A. program in game design at N.Y.U. received their degrees.”

“Baseball on radio and television is the classic sport to nap to — especially on a drowsy Sunday afternoon.”

“The parameters of assistantship have also grown murky as a result of three unusual variants of helpers: fictitious, silent and virtual.”

21. Apps for the Lovelorn

“Now, using your favorite app, track your boyfriend to his vacation spot. It may be late when you arrive, so be sure you have your iPhone flashlight ready as you make your way across the yard and peek into the windows. Now, walk around behind the house to the lake. Follow the sound of moaning. Are those writhing bodies two people making love? Grab your phone and whack your boyfriend repeatedly on the head.”

22. John Waters Brushes Up for the CFDA Spotlight

“My favorite thing is to read Women’s Wear Daily the day after a national disaster. Because they cover it from a fashion viewpoint. Which is what they should be doing.”

“In his small, oil-rich nation in Southeast Asia, the sultan recently began phasing in Islamic, or Shariah laws, covering criminal activity, which prescribe punishments that include public flogging, amputation and death by stoning for offenses such as adultery, abortion and homosexuality. Their adoption prompted a human rights rally and subsequent boycott directed at the Beverly Hills Hotel and, to a lesser extent, nine affiliated luxury properties under the Dorchester Collection banner.”

24. Through the Google Glass, Now at Hotels

“When iPads were the gadget-du-jour, hotels often placed them in guest rooms and restaurants. Now that many guests carry their own tablets, hotels are checking in with new Google Glass wearable computers to entice travelers to check them out.”

“Michael Jordan not simply as a superhero, but as a Man in Full.”

“Has luring men become our only standard for beauty in dress?”

“Humor only occurs when something seems wrong, unsettling or threatening (i.e., a violation), but simultaneously seems O.K., acceptable or safe (i.e., benign).”

“America’s trains transformed a country of small farmers and shopkeepers into an industrial powerhouse, forged a sense of nationhood and inspired some of the country’s most memorable art and literature.”

“Is it the process of killing animals that bothers you, or the very idea?”

“While the Internet may have democratized information — making it seemingly easier for any of us to sell an apartment or find a spouse on our own — we now seem more reliant on all sorts of digital middlemen than ever. Some of them, like eBay, perform simple matching functions that help fulfill the Internet’s great promise of, say, connecting someone shopping for rare Slovenian pop LPs with sellers of same in a matter of seconds. But for more complicated searches, it’s not always clear what role the middlemen serve.”