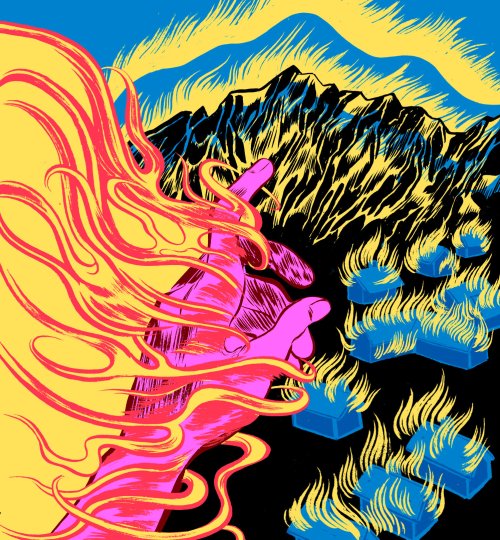 “There were no visions, no prophetic voices or visits by totemic animals, just this blazing everywhere. Something poured into me and I poured out into it. This was not the passive beatific merger with ‘the All,’ as promised by the Eastern mystics. It was a furious encounter with a living substance that was coming at me through all things at once, too vast and violent to hold on to, too heartbreakingly beautiful to let go of. It seemed to me that whether you start as a twig or a gorgeous tapestry, you will be recruited into the flame and made indistinguishable from the rest of the blaze. I felt ecstatic and somehow completed, but also shattered.”

2. Last Bohemian Turns Out the Lights

“I didn’t really leave the Lower East Side. It left me.”

“In a tournament that has been packed with upsets and surprises, one of the few mainstays has been the prominence of the logos of corporate sponsors alongside the N.C.A.A.’s. In total, some 19 major partners and corporate supporters are listed in the official fan guide of the Final Four.”

“Tech needs to grow up in a lot of ways.”

5. I Had a Nice Time With You Tonight. On the App.

“We are now in constant and continuous communication with our friends, co-workers and family over the course of a day. These interactions can help us feel physically close, even if they happen through a screen.”

6. The Oracle of Omaha, Lately Looking a Bit Ordinary

“Put 10 percent of the cash in short-term government bonds and 90 percent in a very low-cost S.&P. 500 index fund. (I suggest Vanguard’s.) I believe the trust’s long-term results from this policy will be superior to those attained by most investors — whether pension funds, institutions or individuals — who employ high-fee managers.”

“Endorsement of same-sex marriage has rather suddenly become nonnegotiable. Expected. Assumed. Proof of a baseline level of enlightenment and humanity. Akin to the understanding that all people, regardless of race or color, warrant the same rights and respect.”

“Linguistically, underneath the distractions of incivility, America is taking a page from Dale Carnegie’s classic How to Win Friends and Influence People. There is, overall, an awareness of the states of minds of others in much of what is typically regarded as Clearasil-scented grammatical sloth.”

“Seven years into writing a novel, I started to lose my mind.”

“I don’t have enough time as it is to read a book or make music, or see my friends. People don’t believe me, too. They think I’m just saying that because I don’t want to give it to them. But no, I do not have email.”

“‘Silicon Valley’ buys into the central dogma of Silicon Valley: Finding new methods to make everything faster, cheaper, more convenient and more efficient will be good for the world.”

13. Banking on My Future as a Father

“Dr. Paul Turek, a men’s fertility specialist and director of the Turek Clinic in San Francisco and Los Angeles, told me he’s been seeing an uptick in young men in the San Francisco area banking their sperm, fearful of the effects of advanced paternal age. Dr. Turek described these men as the ‘aggressive Internet crowd who are single, and want to protect their fertility.’”

14. The Found Art of Thank-You Notes

“The handwritten gratitude intervention seems to be experiencing a moment of vogue.”

“It’s quite a crazy sweater, to be honest.”

“In the ’80s, as disco fell out of favor, Mr. Knuckles moved to Chicago and helped pioneer the sound that came to be known as house music, producing club records by day and spinning at night at the Warehouse, which became one of seminal nightclubs of the era.”

“How do we learn to stop worrying and love it when we bomb?”

19. The Pursuit of Happiness

“Adopting an unusual interpretation of American history, Beckman, a professor of English at the United States Naval Academy, explores the ways outlaw, oppressed and otherwise defiant groups reacted to their condition by creating and celebrating acts of raucous jubilation that represented quests for freedom.”

“Many Turkers are actively helping to put themselves out of jobs.”

“After quitting the C.I.A., Matthiessen returned to America with Patsy and soon settled in Sagaponack, where he would supplement his writing income with commercial fishing. He described those early years on Long Island as the happiest of his life, ‘when I was writing but also doing hard physical labor.’ He referenced a line from Turgenev a few times, from the suicide note of a character named Nejdanov: ‘I could not simplify myself.’ ‘That really struck home,’ Matthiessen said. ‘I knew exactly what he means.’ He paused and then whispered it again. ‘“I could not simplify myself,”’ and then he added, ‘That’s always been my goal.’”

22. The Pernicious Rise of Poptimism

“No matter the field, a critic’s job is to argue and plead for the underappreciated, not just to cheer on the winners.”