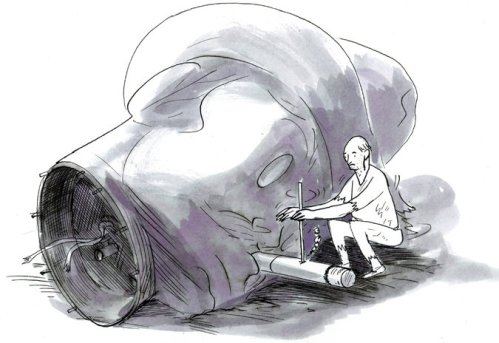 “Over the past generation or two we’ve gone from being producers and tinkerers to consumers. As a result, I think we feel a sense of disconnect between our modern existence and the underlying processes that support our lives. Who has any real understanding of where their last meal came from or how the objects in their pockets were dug out of the earth and transformed into useful materials? What would we do if, in some science-fiction scenario, a global catastrophe collapsed civilization and we were members of a small society of survivors?”

2. Found in Mud: Precious Links to Loved Ones

“After a disaster that has left so many missing, some perhaps never to be found, these ordinary objects have become connections to loved ones and lost lives. They are all that is left.”

“It is human nature, if not the American way, to look potential disaster in the face and prefer to see a bright and shining lie. The ‘taming’ of this continent, in five centuries and change, required a mighty mustering of cognitive dissonance. As a result, most of us live with the danger of wildfire, earthquake, tornado, flooding, drought, hurricane or yet-to-be-defined and climate-change-influenced superstorm. A legacy of settlement is the delusion that large-scale manipulation of the natural world can be done without consequence.”

4. A Communal Space, but Still My Own

“Co-working represents one of the first pieces of infrastructure to support the needs of a creative independent work force.”

5. For a Cattle Rancher, a Legacy on the Range

“Standing outside, the moment just before the sun rises, when it’s still and quiet. You hear only the sounds of nature and God’s creatures, whether it’s piñon trees whistling in the breeze, antelope in the brush, or birds. It’s the greatest gift of living on a ranch.”

“Probably the key thing about my being able to move so often is that I didn’t own a single piece of furniture.”

7. How Businesses Use Your SATs

“Many employers are still asking job applicants for their test scores, even if they are years out of date.”

8. Is the Lime an Endangered Species?

“A sudden and unprecedented shortage of limes has sent nationwide wholesale prices soaring from around $25 for a 40-pound carton in early February to more than $100 today.”

“It sounds like a grandiose statement, but there are watches that have assisted in changing history.”

“They sleep while you’re at work, eat food out of a can and jump on your lap while you watch Netflix: the perfect pet for the so-called millennial.”

“Cobain’s bedroom was just as he left it: with a hole punched in the wall and plenty of graffiti paying homage to bands he liked (Led Zeppelin, Iron Maiden) and perhaps his favorite beer, Olde English 800.”

12. From Airlines to Hotels, a Quest to Help You Sleep

“Sleep is the enemy of capitalism.”

“David Brion Davis’s The Problem of Slavery in the Age of Emancipation, reviewed this week by Brenda Wineapple, concludes a trilogy that Davis began writing in 1959, after he won a Guggenheim fellowship. ‘I was planning on doing a book on American and British antislavery movements,’ he said in an email interview, ‘but soon found that the first chapter on “historical background” should really constitute a book in itself — ranging from ancient Greece to the late 1700s, with a revolutionary shift in the moral perception of slavery.’ That first volume, The Problem of Slavery in Western Culture, was published in 1966. The Problem of Slavery in the Age of Revolution followed in 1975. In the nearly 40 years between the second and third installments, Davis wrote several other books, two of which — Slavery and Human Progress and Inhuman Bondage — ‘deserve a kind of honorary place in the trilogy,’ he said.”

15. On Top of Everything Else

“Mostly good suggestions. But like all self-help advice, they don’t measure up against the entrenched forces that are indifferent if not hostile to the emotional well-being of a majority of Americans. Schulte is fighting SEAL Team Six with a pair of fingernail scissors.”

16. The Price of Slavery

“As a consequence, an American dream of freedom and opportunity was inseparable from a white illusion of superiority, bolstered by the subjugation and ‘animalization’ of black people. That is, slaves were considered domesticated savages who would, if given the chance, revert to murder and mayhem. To many whites, particularly pro-slavery Southerners, this seemed the lesson of the violent and ultimately successful Haitian Revolution, which represented, as Davis puts it, ‘the unleashing of pure Id.’”

“In a worker co-op, the workers own the business and decide what to do with the profits (as opposed to consumer co-ops, which are typically stores owned by members who shop at a discount). Historically, worker co-ops have held the most appeal when things seem most perilous for laborers. The present is no exception. And yet, despite their ability to empower workers, co-ops remain largely relegated to boutique status in the United States.”

“In 1976, Congress created copyright exceptions for educational purposes. Copyright law allows ‘face-to-face’ exhibition and presentation of a copyrighted work, assuming the purpose is academic. There is also the doctrine of fair use, which states that copies ‘for purposes such as criticism, comment, news reporting, teaching (including multiple copies for classroom use), scholarship or research, is not an infringement of copyright.’”