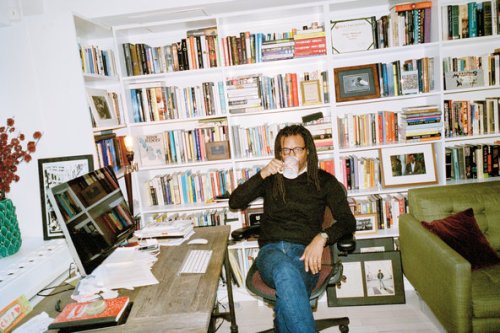 “Instead of a dedicated room, my best trigger is the actual habit of reading over the texts from the day before. Marking. Changing. Fussing. This ritual amounts to a habit of trust. Trust that I can make it better. That if I keep trying, I will come closer to something true.”

2. A Severe Winter Breaks Budgets as Well as Pipes & 3. What the Elite Wear to Meet the Sleet

“The trick to getting by, he said, is learning to simplify one’s needs and desires.”

“Today, companies like IBM, Microsoft and Google also employ social scientists, in-house or as consultants, who specialize in applied anthropology.”

7. Comcast vs. the Cord Cutters

“In most American households, the cable cord is the fastest conduit for broadband service. This suggests the canny strategy by which those once-inescapable cable providers might combat the rise of cord cutters: The cable giants will simply become even-more-inescapable Internet giants.”

9. Where the Fish Swims, Ideas Fly

“My overarching goal right now, wherever possible, is to give myself more time to simply be.”

12. The Tame Truth About the Wolves of Wall Street

“Much of what happens on Wall Street is terrifically boring.”

“Swimming is the ultimate form of sensory deprivation.”

14. Social Media, a Trove of Clues and Confessions

“There have been numerous cases where social media has played an important role in serious criminal investigations.”

“It’s not just that America has marginalized some of its sharpest minds. They have also marginalized themselves.”

16. Is the Universe a Simulation?

“Statistically speaking, therefore, we are more likely to be living in a simulated world than the real one.”

“I surrender control and let the music play.”

19. For Interns, All Work and No Payoff

“At what point does jaunty confidence metastasize into abject bragging?”

21. Learning to Silence My Inner Editor

“So romantic, right? If only I could get over that syntax.”

“It was in 1976 at the Los Angeles Film Critics Association Awards. Irwin had Rocky up for best picture. Paddy had Network. They were standing next to each other when the winner was announced: Network and Rocky in a tie. Winkler turned to Chayefsky. ‘Congratulations,’ he said, offering his hand. Chayefsky looked at him and said, ‘I hope you die.’”

“In their various attempts to live and die in their own way, the flappers represented a genuinely subversive force.”

“Her book is a call to renounce the very idea of race as a dangerous misconception.”

26. The Existential Anguish of the Tattoo

“Free will is terrifying because it necessarily entails the freedom to change radically in the future.”

“There’s a surprising amount of harmony in unremarkable choices.”

“Because the act of bondage so clearly and self-consciously is an act, with its dramatic ‘role playing’ and ‘props,’ it cannot be wholly faked.”

“If I’ve been wearing one perfume for three months, I force myself to give it up, even if I still feel like wearing it, so whenever I smell it again it will always remind me of those three months. I never go back to wearing it again; it becomes part of my permanent smell collection.”

“At one shocking point, he eviscerates a cow and then climbs into its belly. Moments later, ‘Norman II’ emerges as the 72-year-old, African-American jazz drummer Milford Graves. (The third ‘Norman’ is Chief David Beautiful Bald Eagle, 94, a Lakota tribal leader.)”

“The clothes are quiet and not meant to make a statement. And so you look invisible. Able to be viewed for more than your surface appearance. This is power dressing.”