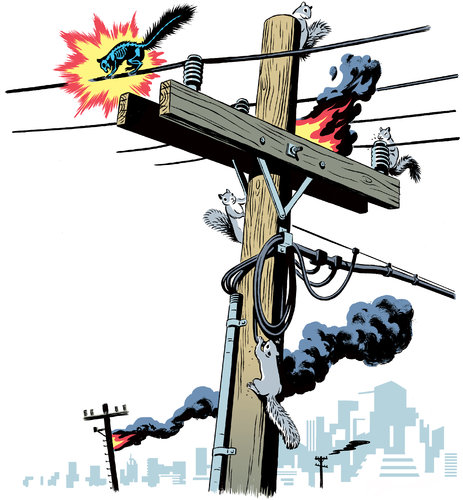 “Some say the world will end in fire. Some say ice. Some say coordinated kamikaze attacks on the power grid by squirrels.”

2. For a Classic Motown Song About Money, Credit Is What He Wants

“Maybe four to five times a year, I go to the cinema, mostly Hollywood movies, like action movies. Why do I like the action movies? Because there are so many complicated things in my brain, I really want to release myself. Action movies have clear delineations between good and bad.”

4. A Data Broker Offers a Peek Behind the Curtain

“What happens if 20 percent of the American population decides to opt out? It would be devastating for our business.”

5. From Example to Excess in Silicon Valley

“It feels as if the promise of the tech world – its utopian ideals and democratic aspirations – has dissolved into much more selfish pursuits of power and wealth.”

“Income inequality in the United States has been growing for decades, but the trend appears to have accelerated during the Obama administration.”

7. Conquering Frustration on the Road Back to Work

“Many people we see are feeling numb, almost as if they have post-traumatic stress syndrome. We’re not meeting them at a good time in their lives, and working with them takes patience and understanding.”

8. Lee Child and the Macho of Minimalism

“I love minimalism, which to me is more than a decorative style. It’s a fundamental choice which ties into my character Jack Reacher. He has this desire – he wants everything he needs and nothing he doesn’t.”

9. Explaining Twerking to Your Parents

“Every child dreads this day: sooner or later, your parents will come to you, innocently wide-eyed, to ask you about twerking.”

“I go to CNN.com, like, five or six times a day. I don’t know. Maybe I have I.D.P. – information deprivation paranoia.”

“But if you look past their soaring rhetoric, you’ll see globe-trotting university presidents and trustees who are defining down their expectations of what a liberal education means, much as corporations do when they look the other way at shoddy labor and environmental practices abroad. The difference, of course, is that a university’s mission is to question such arrangements, not to facilitate them.”

12. Who Will Prosper in the New World

“Self-driving vehicles threaten to send truck drivers to the unemployment office. Computer programs can now write journalistic accounts of sporting events and stock price movements. There are even computers that can grade essay exams with reasonable accuracy, which could revolutionize my own job, teaching. Increasingly, machines are providing not only the brawn but the brains, too, and that raises the question of where humans fit into this picture — who will prosper and who won’t in this new kind of machine economy?”

“Episodes of extreme climate make people more violent toward one another.”

14. Gladiators Battling on the Chess Board

“Moving between 1973 and 1997, the play intersperses tense chess matches with flashbacks that show the rise of Mr. Kasparov, a fatherless boy with an iron-willed, dominating mother (played by Francesca Annis), and the first glimmerings of what Deep Blue could be in the obsessive vision of Mr. Hsu, a Taiwanese graduate student.”

“I work on holidays, I work on birthdays, I work on New Year’s. I work. I keep my ears to the streets. I love a lot of these new up-and-coming young cats, because they remind me of me coming up, hustling.”

16. For John Legend, No Colors Anymore, Except for Swimming

“I tend to wear a lot of black when I’m in New York. It’s the color of the city. Actually, as I’ve gotten older, my clothes have gotten simpler, cleaner.”

“One thing I noticed was that at the more accessible price points, there was almost a patronizing separation between over-the-top styles and dowdy. There was nothing that was refined and understated.”

18. What I Learned Driving Through the Heartland

“The greatest take-away from my five weeks on the road was how much I could learn without crossing any borders. I’ve made my way through Latin America, the Mediterranean, Scandinavia and southern China. But a spin through the middle of my own country was every bit as, well, exotic – revealing you don’t have to go abroad to experience new music, annual rites and political views far different from what you find at home.”

“Words like ‘ensorcelled’ and ‘passional’ pop into my mind; I don’t go hunting for them…. In an earlier collection of essays, Cleavage, I said that I care as much about fashion liberation as about sexual liberation. Well, I care even more about vocabulary liberation.”

20. Jonathan Lethem: By the Book

“As for California, I read Raymond Chandler long before I’d been here. I breathed in the atmosphere of those books before I even understood Chandler was writing about real places rather than conjuring a zone where his stories could be enacted. Now that I’m here, I see his books – and Ross Macdonald’s – as making a deep stratological survey of the place, in the manner of John McPhee.”

“It’s a blueprint for living peacefully with a brilliant and monstrously selfish man.”

22. There Are No Sound Moral Arguments Against Performance-Enhancing Drugs

“The lines have been drawn capriciously, but the lines exist. Though it’s difficult to explain why, we’ve collectively agreed it’s O.K. for an injured football player to take a shot of Toradol to help ignore an injury, but not a shot of testosterone to help that injury heal faster.”

“His first book, Whites (1986), a collection of stories that was a finalist for the Pulitzer Prize, wasn’t published until he was 52; his first novel, the 477-page, National Book Award-winning Mating (1991), took eight years to write; his second novel, the 712-page Mortals (2003), took 10 years. And yet, upon the appearance of Mortals, Rush told Elsa – promised her – that his next novel would be a mere 180 pages and take two years to complete. But there we were on their porch in 2011, eight years later, and the ‘next novel’ – Subtle Bodies, which is at last being published this month – was, as of that date, quite a bit longer than 180 pages and still not finished.”

24. Googling Yourself Takes on a Whole New Meaning

“Most of our other computer devices are semipublic, even social: people can generally peer over your shoulder to see what you’re doing on a laptop or even a smartphone. But with Glass, the contents of your screen are a mystery to others.”

“Now that I see so few movies, every single one is an ecstatic experience. They all become impossibly brilliant and entertaining.”