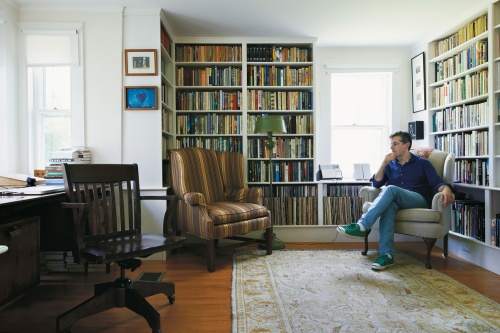 “A view of Rome, a pristine computer screen, a photograph of Basquiat, an I.B.M. 196c typewriter, the ghost of another author. For these writers below — each of whom releases a new book this fall — all they need to inspire is within these walls.”

“The money and programming focused on college football by ESPN, as well as its competitors, have transformed the game, creating professionalized sports empires in the midst of academic institutions.”

“As banks zero in on more affluent customers who promise twice the revenue of their lower-income counterparts, close branches in poor areas and remain stingy with credit, pawnshops are revamping their image and stepping into the void to offer financial services.”

“The journey we have chosen is one that started with Copernicus. We have a very small life, of 70 to 80 years, and the kind of change we will see during that time will be small.”

“There is not a lot of internal searching among engineers. They are not encouraged to say, ‘What does that mean for society?’ That job is left for others. And the law and social norms trail in dealing with the pace of technical changes right now.”

“A great mind can have great thoughts only if all its powers of concentration are brought to bear on one subject, in the same way that a concave mirror focuses light on one point. Just as a mighty army becomes useless if its soldiers are scattered helter-skelter, a great mind becomes ordinary the moment its energies are dispersed.”

7. How Technology Wrecks the Middle Class

“Have we mechanized and computerized ourselves into obsolescence?”

“If writers agree on anything — which is unlikely — it’s that nothing can damage a novel in embryo as quickly and effectively as trying to describe it before it’s ready.”

9. What Is Economics Good For?

“When it comes to economic theory’s track record, there isn’t much predictive success to speak of at all.”

“Monopoly was invented not by an unemployed man during the Great Depression but in 1903 by a feminist who lived in the Washington, D.C., area and wanted to teach about the evils of monopolization. Her name was Lizzie Magie.”

11. Does Media Violence Lead to the Real Thing?

“A growing body of research indicates that this reasoning may be off base. Exposure to violent imagery does not preordain violence, but it is a risk factor. We would never say: ‘I’ve smoked cigarettes for a long time, and I don’t have lung cancer. Therefore there’s no link between smoking cigarettes and lung cancer.’ So why use such flawed reasoning when it comes to media violence?”

“The judgments of critics can be corrected by time, and the blindness of the public can give way to enlightenment.”

“I got in an elevator, and there was a guy who was also auditioning, and I thought: ‘That guy brought a lot of props. I didn’t bring anything.’ And he was looking at me, going, ‘That guy didn’t have to bring any props.’ We were just sizing each other up in the elevator.”

15. Women at Google Looking Past the Glass Ceiling

“While flaunting the newest gadget may be the epitome of style for people in the tech industry, something that could be so radically paradigm-changing is a harder sell for a set more accustomed to the double G’s of Gucci.”

“This is the first hint of how Finland does it: rather than ‘trying to reverse engineer a high-performance teaching culture through dazzlingly complex performance evaluations and value-added data analysis,’ as we do, they ensure high-quality teaching from the beginning, allowing only top students to enroll in teacher-training programs, which are themselves far more demanding than such programs in America. A virtuous cycle is thus initiated: better-prepared, better-trained teachers can be given more autonomy, leading to more satisfied teachers who are also more likely to stay on.”

“Opinions are at best provisional hypotheses, incompletely tested. The more they are tested, after the tests are well scrutinized, the more assurance we may assume, but they are never absolutes. So we must be tolerant of opposite opinions or varying opinions by the very fact of our incredulity of our own.”

“My grandpa Max the junkman would say in Yiddish, ‘The wheel is always turning.’ What he meant was how to behave toward people. The person on the bottom of the wheel, you better be nice to, because at some point you’re going to be on the bottom.”

20. The Summer I Discovered Suburbia

“Ohio was heaven. I loved riding bikes down empty sidewalks. I loved being covered with bug spray and lying in the backyard, looking at the stars. I loved that there always seemed to be roaming gangs of kids, snacks on paper plates and ice-cold cans of soda. I loved Blizzards (soft-serve ice cream from Dairy Queen, with candy mashed into it). As my parents tell it, when they picked me up from the airport, the first thing I said to them — people who had fled their suburban childhoods and prided themselves on having raised ‘a city kid’ — was an enraged hiss: ‘You didn’t tell me about all that!’”

“Living in an age when most things are both digital and disposable creates an even more intense longing for physical objects that speak to you and will remain in your life.”

“Gandolfini himself was 51: he was grizzled, overweight, red in the face and complex in the soul, but to many people, men and women, he had never looked better in his life. (‘I would,’ a woman back at my table said.) In this not entirely fair world of ours, men, as they grow older, get to look distinguished, while women often feel they disappear.”

“Isn’t mystique and the unknown part of what keeps you drawn to someone?”

24. Los Angeles, Where the Wild Things Are

“So what if Los Angeles is still better known for implants than outerwear? Or if it still hasn’t apologized for popularizing spandex, man jewelry and the Ugg boot? Never mind. Rents are cheap! The light is amazing! The beach! The mountains! The avocados!”

“Elegance is really about economy.”