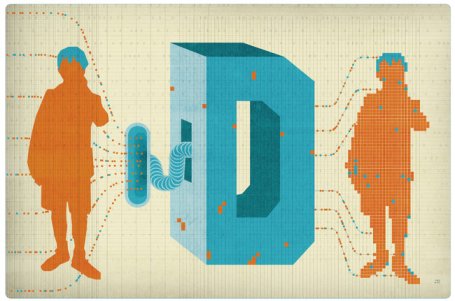 1. Sure, Big Data Is Great. But So Is Intuition.

“Big Data is a descendant of Frederick Winslow Taylor’s ‘scientific management’ of more than a century ago. Taylor’s instrument of measurement was the stopwatch, timing and monitoring a worker’s every movement. Taylor and his acolytes used these time-and-motion studies to redesign work for maximum efficiency. The excesses of this approach would become satirical grist for Charlie Chaplin’s Modern Times. The enthusiasm for quantitative methods has waxed and waned ever since.”

“As the American campaign has cut deeply into the commands of both the Taliban and Al Qaeda, drone-fearing militants have turned to the local community for reprisals, mounting a concerted campaign of fear and intimidation that has claimed dozens of lives and further stressed the already fragile order of tribal society.”

3. An Idea Promised the Sky, but India Is Still Waiting

“The project’s entire premise — that India can make a cheap tablet computer that will somehow make up for failures of the country’s crippled education system — is fundamentally flawed.”

4. So Many Snapshots, So Few Voices Saved

“I remember the regret I felt after my mom died, years ago, that we had no recording of her voice on tape. And yet when my dad died in 2008 — same thing. Plenty of photographs, but no record of the sound of his voice. I’m glad to have the photos, but I miss the immediacy of those voices, the way that even a recorded voice captures the movement of time and the resonance of the body with extraordinary intimacy.”

“Idly mingling, a human body radiates about 100 watts of excess heat, which can add up fast in confined spaces.”

6. Sneaking Back, From Out of Nowhere

“In movie after movie he presents himself as a man so unremarkable that you have to wonder if anything at all is going on underneath that opaque surface. And then slowly, painstakingly, he unwraps the package and shows you what’s inside. He always seems cautious and watchful, waiting for the moment when he can (or must) reveal himself.”

“After working with terminal patients for over 30 years, Dr. Byock recommends four simple expressions. ‘Please forgive me.’ ‘I forgive you.’ ‘Thank you.’ ‘I love you.’”

8. Arnold Schwarzenegger: By the Book

“One of my favorite characters in history is Cincinnatus, and I’ve read everything I can find about him. I would love to play him in a film about ancient Rome. He was given the keys to the kingdom — pure, absolute power! — and he did the job and then went back to his farm. He didn’t get drunk on the power. He did the job he was asked to do, dealt with the invasion and walked away. That is the purest form of public service I can imagine, and it would be fun to try to capture that character on film.”

9. Shock to the Senses

“The idea of a ‘romantic science’ can be traced to Goethe. The German philosopher, poet and scientist opposed a mechanistic, analytical science of static categories for a fluid and organic one. A. R. Luria, the 20th-century Soviet neurologist, who was a mentor to and friend of Sacks, evoked the tension between ‘romantic’ and ‘classical’ science in his intellectual autobiography, The Making of Mind. ‘Romantic scholars,’ he wrote, ‘do not follow the path of reductionism.’ Instead they strive ‘to preserve the wealth of living reality.’ Classical scholars work piecemeal toward the formulation of abstract laws, and in the process they sometimes ‘murder to dissect.’ Romantics may err in the other direction when their ‘artistic preferences and intuition’ take over. Luria sought a middle ground — a science that preserves the part without losing the synthetic whole. This is not an easy balance to achieve, but for Sacks, unlike many clinicians in his field, it remains an ideal.”

“The essay doesn’t die. It’s too protean. It only grows more indispensable as it learns to mimic, then amplify, our senses. The essay is a way of seeing through language, and in language. It grasps and sifts — recall its cognate ‘assay,’ the distinguishing of base metals and gold. And if we like our art forms promiscuous and free, it obliges.”

“Circumnavigation marks humanity’s progress upon the Earth — not just technological advancement, but the maturing of our relationship with the land, the sea and one another. Once we encircled it to own it; now we do so to comprehend it.”

“One of the little-known roles of the academic librarian is bereavement counseling: assisting families with the disposition of books when the deceased have not specified a plan for them. Most relatives know these books were the lifeblood of their owners and so of intellectual value if not great monetary worth. But they remain clueless about how to handle them responsibly. Some call used-book shops. Some call the Salvation Army. Others call a university library. Many allow friends and relatives to pick over the shelves before bringing in a professional.”

“Like Vidal, Hughes and Hitchens, Fussell was an intellectual malcontent, weaned on Orwell and on William Hazlitt, who wrote the surprisingly sunny essay ‘On the Pleasure of Hating.’ We are unlikely to see their kind again.”

“Long before the Huxtables opened up their townhouse in Brooklyn Heights to millions of viewers, long before Vanessa Williams was crowned the first black Miss America, indeed, nearly 40 years before the Obamas moved into the White House, Don Cornelius conceived of a TV show that gave most middle-class white teenagers their first real glimpse of popular black culture. And what they saw through that window was unadulterated joy — a deep love of music and the irrepressible urge to dance to it. (They were also getting a peek at the future; by the ’90s, black music and dance was the culture.)”

16. Lessons for the Living From the Departed

“Bradbury left high school with plans of going to college, but no money. So he set out to educate himself by going to the library three days a week, a regimen he continued for 10 years, never romanticizing poverty or the so-called writer’s life. Instead, he celebrated the joy of writing itself. In 1951, living in Los Angeles with his wife two and two infant daughters, he got a bag of dimes and rented a typewriter in the U.C.L.A. basement for 10 cents a half-hour. He wrote Fahrenheit 451 for $9.80.”

“Not many things are better than a kitten.”