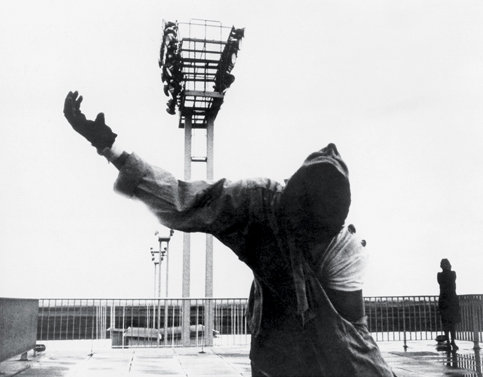 1. What Back to the Future and Terminator Owe to La Jetée

“The camera is itself a time machine.”

2. A Guitar Maker Aims to Stay Plugged In

“It’s worth remembering that the accordion was once the most popular instrument in America.”

3. The Lowest Fare? Ask the Crowd

“About 20 percent of the Flightfox researchers are travel agents. Another large group are what Mr. Sullivan calls ‘flight hackers,’ people who enjoy the sport of fare-hunting and frequent sites like FlyerTalk. ‘They do this at sites like this for free anyhow,’ Mr. Sullivan says. ‘We’ve commercialized it.’”

“Passion is not something you follow. It’s something that will follow you as you put in the hard work to become valuable to the world.”

5. The Myth of Male Decline

“What we are seeing is a convergence in economic fortunes, not female ascendance.”

“The first time I saw a female Roman Catholic priest on the church altar, dressed in traditional robes, performing the Eucharist and all of the rituals that I grew up with, I was amazed at how deeply it affected me emotionally.”

7. Kill the Indians, Then Copy Them

“The appropriation of Indian virtues is one of the country’s oldest traditions.”

8. Valium’s Contribution to Our New Normal

“Valium was, significantly, one of the first psychoactive drugs to be used on a large scale on people who were basically fine.”

“I never really enjoyed drawing or art classes. I would prefer to sit in front of the TV or play video games.”

10. What Sands of Time Did Not Erase

“The film holds up not only for its historical parallels but also because it’s thrilling and, in its present incarnation, it looks breathtaking.”

“There are four heroes, all equally strong and broadly drawn: the smart one (Donatello), the wild one (Michelangelo), the brawler (Raphael) and the leader (Leonardo).”

“Last year, several lawmakers in Mexico City proposed the creation of short-term, renewable marriage contracts with terms as brief as two years. The idea was to own up to the reality that marriages fail about half the time.”

“We do not know where, exactly, he gave the speech – in England, aboard his flagship as his fleet was preparing to depart; or on board the Arabella as the New World and its hills came into view. We do not know, with certainty, that Winthrop ever gave the speech at all.”

“He reveals each of these influences somewhat painfully, it should be noted, and accompanied by a string of self-conscious caveats about sounding horribly pretentious.”

16. Quentin Tarantino Tackles Old Dixie by Way of the Old West (by Way of Italy)

“Il Grande Silenzio has one of the most nihilistic endings of any western. Trintignant goes out to face the bad guys – and gets killed. The bad guys win, they murder everybody else in the town, they ride away and that’s the end of the movie. It’s shocking to this day.”