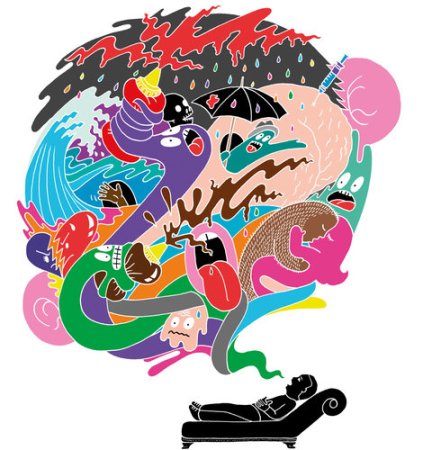 “Why would a smart, comically capable young man be such a thoroughgoing mess?”

“The amount of defaulted loans – $76 billion – is greater than the yearly tuition bill for all students at public two- and four-year colleges and universities.”

“In large part, the bookshelf served to highlight New Yorkers’ ability to ignore anything in their paths.”

4. In Defense of the Power of Paper

6. What Work Is Really For

“We’re ambivalent about work because in our capitalist system it means work-for-pay (wage-labor), not for its own sake. It is what philosophers call an instrumental good, something valuable not in itself but for what we can use it to achieve. For most of us, a paying job is still utterly essential – as masses of unemployed people know all too well. But in our economic system, most of us inevitably see our work as a means to something else: it makes a living, but it doesn’t make a life.”

“Because language is a primary factor in shaping whether a politician is seen as ‘likable’ or ‘relatable,’ the stark differences in speaking styles between Mr. Obama and his Republican challenger, Mitt Romney, are probably contributing to the persistently higher marks for ‘personality’ that Mr. Obama has gotten in numerous polls.”

“The techniques that served Cicero will just as effectively serve modern writers of opinion.”

“There’s an underexamined technological determinism that shapes discussions about the end of film and obscures that the material is being phased out not because digital is superior, but because this transition suits the bottom line.”

10. How Does Denzel Washington Take Off?

“Mr. Washington has two smiles; for example, a big open one that he uncorks when his character is genuinely delighted and a small tight one that signifies something considerably more sinister. (That’s the one he uses in Training Day and American Gangster.) He’ll widen his eyes or – slightly – narrow them, to similar purpose. When he plays a military man, as he often has, his bearing becomes a bit more rigid, more willfully correct. But these are just little tricks he’s mastered, cards to pull out of his sleeve when he needs them.”

“This is music as structural architecture, like buildings at the steel girders and concrete phase, long before anyone picks out sink fixtures or doorknobs.”

12. Saris: No Longer Under Wraps

13. Spreading the Word (and Pictures) on ‘Real’ Sex

“Compared with the harsh lens of mainstream pornography, the videos come across as sweet, earnest, languid, playful and deeply human.”

“Forget climbing Everest, trekking to the South Pole or canoeing up the Amazon: How about taking a trip to the far side of the moon?”

“He defines privacy as a form of ‘resistance to exploitation’ and says the rich have more ability to assert it than the poor. At the same time, he insists that respect for privacy is ‘essential to a democracy,’ and that privacy ‘might be placed on an even stronger footing in a more social democracy,’ with greater economic equality.”

“Like a 17th-century craftsman, he has no economy of scale. It takes Frew about 75 hours to make a suit – he averages about two per month – and he has no employees. A large part of his revenue is used to pay off his material expenses, and because his labor is so demanding, he relies on an outside salesman, who requires commissions. (Frew can’t even afford to make a suit for himself. When we met, he was wearing shorts and a T-shirt.)”

17. How Dangerous Is Your Couch?

“High concentrations have been found in the bodies of creatures as geographically diverse as salmon, peregrine falcons, cats, whales, polar bears and Tasmanian devils. Most disturbingly, a recent study of toddlers in the United States conducted by researchers at Duke University found flame retardants in the blood of every child they tested. The chemicals are associated with an assortment of health concerns, including antisocial behavior, impaired fertility, decreased birth weight, diabetes, memory loss, undescended testicles, lowered levels of male hormones and hyperthyroidism.”

18. 30 Variations and a Microphone

“The record, Bach: The Goldberg Variations, was released on Jan. 3, 1956. Half a century later, it is justly celebrated as an all-time great debut. The freshness of Gould’s approach – 38½ minutes; no repeats; no pedal, no rubato; no fidelity to older models – was obvious to people who knew something about classical music. But its power was also apparent to people who were coming to the music for the first time: bright, swift, sprung forward, urgent even in the slow variations, it is a record that opens up the music of Bach and the classical tradition through its arresting clarity and directness.”

“There are basic ground rules, or rather, commandments, to follow, like thou shalt not bring a wire coat hanger into the closet. Ever. Thou shalt not put dirty shoes back before cleaning and, if necessary, polishing (and, if so, allow to air out for 24 hours or until the scent evaporates). Thou shalt not hang clothes in plastic sleeves from the dry cleaners for reasons that are threefold: 1) Plastic doesn’t allow clothes to breathe; 2) Plastic attracts dust. Dust attracts moths (that’s just common sense); and 3) This would almost definitely involve a wire coat hanger. And following last week’s near disaster I’m tempted to add a new one to the list: Shower before entering.”

“I felt like I was participating in a nonlethal Hunger Games competition, even when I was just running out to buy milk.”

“He is not a practitioner of nonviolent movements but rather a theorist of power.”

22. The House That Hova Built

“With Tupac, you can hear the effort, the artistry. And Biggie’s words first had to struggle free of the sheer bulk of the man himself. When Jay raps, it pours right into your ear like water from a tap.”