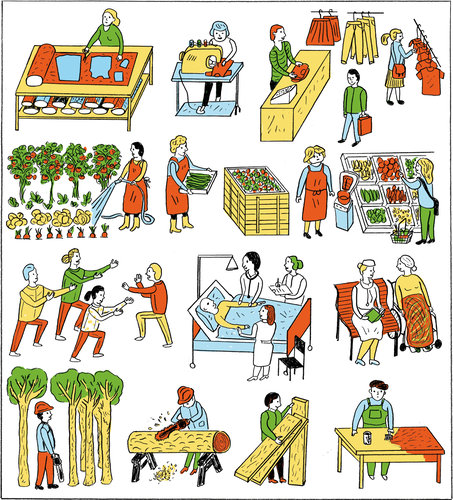 “At first, this may sound crazy; we’ve become so conditioned by the language of efficiency. But there are sectors of the economy where chasing productivity growth doesn’t make sense at all.”

2. “Standing Out and Blending In”

“Every profile starts with the beard, and why not? It is striking – dense and complex and lush with possibility. It has inspired a movement, a song and a cake. It is a shaggy portal into James Harden’s soul.”

“I’ve used a bike to get around New York for decades. There’s an exhilaration you get from self-propelled transportation – skateboarding, in-line skating and walking as well as biking; New York has good public transportation, but you just don’t get the kind of rush I’m talking about on a bus or subway train. I got hooked on biking because it’s a pleasure, not because biking lowers my carbon footprint, improves my health or brings me into contact with different parts of the city and new adventures. But it does all these things, too – and sometimes makes us a little self-satisfied for it; still, the reward is emotional gratification, which trumps reason, as it often does.”

“That anxiety all-star team, were it actually to be assembled, would contain at least a couple of Jews – Moses at third, say, and Franz Kafka in right – but plenty of gentiles would make the cut, too. As the self-appointed general manager I’d offer contracts to Charles Darwin, who suffered from debilitating insomnia and panic attacks; to Emily Dickinson, who ‘lived on Dread’ and almost never left the house; to William James, who spent a decade paralyzed by uncertainty, and his sister Alice, a nervous invalid (I’d put them at second and shortstop, respectively, so they could talk to each other); and on the mound, Soren Kierkegaard, who made anxiety not only a way of life but also a central philosophical concept, declaring (with suspicious exaggeration), ‘The greater the anxiety the greater the man.’”

“We need distance from, as much as we need association with, one another.”

“America has always been attracted to ruthlessness.”

“With the Internet, etc., it’s no longer a necessity to be somewhere ‘in person.’”

“Walking isn’t just good for you. It has become an indicator of your socioeconomic status.”

“Of all the major hubs of Internet-era excitement, Mark Zuckerberg’s social networking site has always struck me as one of the most noxious, dependent for its success on the darker aspects of online life: the zeal for constant self-fashioning and self-promotion, the pursuit of virtual forms of ‘community’ and ‘friendship’ that bear only a passing resemblance to the genuine article, and the relentless diminution of the private sphere in the quest for advertising dollars.”

11. “The ‘Invisible Art’: A Woman’s Touch Behind the Scenes”

“The editing room is where women have thrived, even if it has meant splicing, dicing and realizing the visions of directors who have been overwhelmingly male.”

12. “Voted Most Likely to Slaughter”

“He fell especially hard for what he called the ‘underdog’ slasher, a low-budget subgenre that generally follows a formula: a sexually repressed man-child kills, in outlandish ways, frisky teenagers who are having sex in dorms, homes or (ideally) the woods.”

“Hochschild’s great subject is ‘emotional labor,’ which we usually think of as the psychic work we do, voluntarily, for ourselves and our intimates, to keep our relationships and communities alive. But emotional labor, for her, is also the psychic work we do for pay, so that both we and our clients can gloss over the nakedly transactional aspect of the services on offer. Or it’s the work we do to tamp down our guilt and shame about contracting out undertakings we think we ought to do ourselves. Yet another form of emotional labor involves toggling between all the different kinds of emotional labor without being fazed by the self-alienation and contradictions involved.”

“The principal influences on inequality that Noah examines include the failure of America’s schools to keep pace with the step-up in skills that advancing technology demands from our labor force; America’s skewed immigration policy, which inadvertently brings in more unskilled than skilled immigrants and thereby subjects already lower-income workers to greater competition for jobs; rising competition with China, India and other low-wage countries, as changing technology enables Americans to buy ever more goods and even services produced overseas; the failure of the federally mandated minimum wage to keep up with inflation; the decline of labor unions, especially among employees of private-sector firms; and what he sees as an anti-worker and anti-poor attitude among American politicians in general and Republicans in particular.”

“Whatever their political party, American leaders have generally subscribed to one of two competing economic philosophies. One is a small-government Jeffersonian perspective that abhors bigness and holds that prosperity flows from competition among independent businessmen, farmers and other producers. The other is a Hamiltonian agenda that believes a large, powerful country needs large, powerful organizations. The most important of those organizations is the federal government, which serves as a crucial partner to private enterprise, building roads and schools, guaranteeing loans and financing scientific research in ways that individual businesses would not.”

“Barack Obama’s support for gay marriage finds precedent in the medieval church. As Eric Berkowitz recounts in Sex and Punishment, male-bonding liturgies ‘performed in churches all over the Mediterranean’ were ‘sanctified by priests’ with marriage prayers, the pair’s joining hands and a ceremonial kiss.”

“Having a female body – the ability to bring forth life – is something you could be grateful about, not repulsed by.”

18. “Noomi Rapace Arrives in Hollywood, by Way of Outer Space”

19. “How Roland Barthes Gave Us the TV Recap”

“Instead of constructing multivolume monuments of systematic thought, Barthes wrote short books built out of fragments. He was less interested in traditional coherence than in what he called jouissance: joy, surprise, adventure, pleasure – tantric orgasms of critical insight rolling from fragment to fragment.”