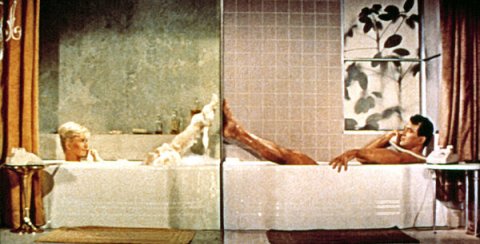 1. “Two Smooth Operators on the Line”

“Here’s a vivid illustration of sexuality as performance.”

2. “A Generation Hobbled by the Soaring Cost of College”

“I’ll be paying this forever.”

3. “Writer’s Cramp: In the E-Reader Era, a Book a Year Is Slacking”

“You don’t ever want to get into a situation where your worth is being judged by the amount of your productivity.”

“Climbing is pretty much the only thing that holds Ashima’s interest for long. Television, movies and computers are not a big part of her day, partly because the Waldorf school she attends has a philosophy that includes a general distaste for technology. She collects handmade Japanese stickers, which she keeps in a scrapbook, and her favorite subjects are gym and woodworking, where she learned to make a cutting board and a salad spoon and fork.”

5. “Sexuality and Other Female (Film) Troubles”

“I wanted to make a Merchant-Ivory movie with vibrators.”

6. “Chronicling the Pounds, Their Risks and Causes”

“Our DNA has programmed us to want more, and our economic and cultural systems have delivered more.”

“The choices we make in day-to-day life are prompted by impulses lodged deep within the nervous system. Not only are we not masters of our fate; we are captives of biological determinism. Once we enter the portals of the strange neuronal world known as the brain, we discover that – to put the matter plainly – we have no idea what we’re doing.”

8. “Capitalists and Other Psychopaths”

“To expect morality in the market is to commit a category error. Capitalist values are antithetical to Christian ones. (How the loudest Christians in our public life can also be the most bellicose proponents of an unbridled free market is a matter for their own consciences.) Capitalist values are also antithetical to democratic ones. Like Christian ethics, the principles of republican government require us to consider the interests of others. Capitalism, which entails the single-minded pursuit of profit, would have us believe that it’s every man for himself.”

9. “The Human Disaster of Unemployment”

“A recent study found that a 10 percent increase in the unemployment rate (say from 8 to 8.8%) would increase the suicide rate for males by 1.47%. This is not a small effect. Assuming a link of that scale, the increase in unemployment would lead to an additional 128 suicides per month in the United States.”

“According to the American Humane Association, last year more than seven million dogs and cats went missing; only about 17 percent of lost dogs and 2 percent of lost cats ever find their way back from shelters to their original owners. More than 10 million pets are euthanized every year because their owners can’t be found. HomeAgain’s Web site has a ticker counting pet recoveries tracked to chip technology; as of late April, it clocked 1,016,843 such reunions.”

“When his own creative juices are clotting up, he reaches over to his desk and picks up, of all things, an Acheulean hand ax.”

12. “Dieting for Dollars (or Maybe a Movie Ticket)”

“They decided to build a computer program to make shedding pounds as geekily fun as playing Xbox, but with an added incentive: the opportunity to win cash.”

13. “Meet Your Neighbors, if Only Online”

“There’s a common misreading that technology inevitably leads to the decline of the local community. I don’t believe that. Technology can be harnessed to facilitate local interactions.”

“70 percent of those who report heavily using mobile devices experience ‘phantom vibration syndrome,’ which is what happens when your pocket buzzes and there’s no phone in your pocket.”

“Science writers, like teachers, have an obligation to get the facts right. When enough details are wrong, readers may lose confidence in the big picture.”

“Humans and certain insects are the planet’s ‘eusocial’ species – the only species that form communities that contain multiple generations and where, as part of a division of labor, community members sometimes perform altruistic acts for the benefit of others.”

“One morning at breakfast, when she was in the first or second grade, E. L. Doctorow’s daughter, Caroline, asked her father to write a note explaining her absence from school, due to a cold, the previous day. Doctorow began, ‘My daughter, Caroline….’ He stopped. ‘Of course she’s my daughter,’ he said to himself. ‘Who else would be writing a note for her?’ He began again. ‘Please excuse Caroline Doctorow….’ He stopped again. ‘Why do I have to beg and plead for her?’ he said. ‘She had a virus. She didn’t commit a crime!’ On he went, note after failed note, until a pile of crumpled pages lay at his feet. Finally, his wife, Helen, said, ‘I can’t take this anymore,’ penned a perfect note and sent Caroline off to school. Doctorow concluded: ‘Writing is very difficult, especially in the short form.’”

“He was raised vegetarian and became a vegan in college, at one point eating nothing but brown rice for 10 days. Not long after he moved to New York, he adopted a ‘paleo’ diet, eating mostly meat and berries. Now he is obsessed with authentic Chinese food.”

“In another famous case, a 9-year-old boy named Jeffrey Bailey pushed a toddler into the deep end of a motel swimming pool in Florida. As the boy struggled and sank to the bottom, Bailey pulled up a chair to watch. Questioned by the police afterward, Bailey explained that he was curious to see someone drown. When he was taken into custody, he seemed untroubled by the prospect of jail but was pleased to be the center of attention.”