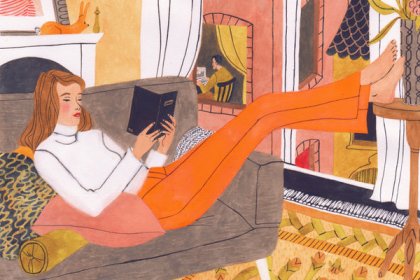 “More people live alone than at any other time in history.”

“The influx affects more than just the bottom line – campus culture, too, is changing.”

3. “To Combat Modern Ills, Korea Looks to the Past”

“Centuries ago, carefully selected boys from across Korea lived secluded lives on this campus surrounded by pine trees, a creek and a pond. They read Confucian classics and recited poems about nature. They began and ended their days by visiting a shrine where Confucian sages were venerated. They bowed twice, head touching the floor, before answering their teacher’s questions on the day’s reading. In their heyday, more than 700 such academies dotted Korea, training applicants for the civil service and serving as guardians for the Confucianism that provided the ruling ideology of the Yi dynasty (1392-1897).”

“For companies, the premise of gamification is that it engages people in the kind of reward-seeking behaviors that lead to increased brand loyalty, not to mention increased profits. By tracking the online activities of people who sign up for such programs, companies can also amass more detailed metrics about each user – the better to identify the most active customers.”

“What does it mean to treat human behavior as if everyone has a price?”

6. “The Death of the Cyberflâneur”

“Hardly anyone ‘surfs’ the Web anymore.”

7. “Should Personal Data Be Personal?”

“The bits and bytes about your life can easily be used against you. Whether you can obtain a job, credit or insurance can be based on your digital doppelgänger – and you may never know why you’ve been turned down.”

“The more we rely on technology to find our way, the less we build up our cognitive maps.”

“Since the silent era the industry standard has been 24 frames a second. Peter Jackson is shooting The Hobbit at 48; James Cameron may well make Avatar 2 at 60. Mr. Trumbull is talking 120.”

“In a land where the uniform – jeans, hoodies and flip-flops – is purposefully nonchalant, and where no one would be caught dead in a tie, wearing flashy socks is more than an expression of your personality. It signals that you are part of the in crowd. It’s like a secret handshake for those who have arrived, and for those who want to.”

“Online culture brings new opportunities to engage with other partners outside the traditional bounds of monogamy, whether they are hookups on Craigslist or flirtatious ‘direct messages’ on Twitter.”

“The tailored topcoat is reappearing on men interested in stylish dressing.”

“For those still unfamiliar with Raylan Givens, he’s a United States marshal known for his ever-present cowboy hat and his quick draw. He also has good manners, is deferential toward women and demonstrates a certain reticence about speaking any more than is necessary. ‘I haven’t thought of anything worth saying,’ he tells one character, who replies: ‘You just did it again. You make one-line declarations. You sort of mope around, so to speak, while your mind is flicking lines at you.'”

15. “Three Books Explore the Reality Behind the World of ‘Downton Abbey’”

“Until ‘Downton Abbey,’ I never realized how many of my deepest desires involved ironing. True, it would also be nice to have a great deal of furtive sex with my social inferiors, preferably in crinolines. But at this point, I’d settle for a crisp newspaper.”

“He argues that it is an intellectual’s duty to ‘speak truth to power’ no matter what, and there is no doubt of his willingness to endure withering castigation for his own views. In return, he skewers many people – Thomas Friedman, David Brooks, Michael Mandelbaum, Judith Miller, Leon Wieseltier, Michael Ignatieff, myself included – for being ignorant at best and willing dupes of power at worst, never conceding that his opponents could be honestly wrong or that his own views might deserve more introspection.”

“The yogis of old, Broad notes, ‘were often vagabonds who engaged in ritual sex or showmen who contorted their bodies to win alms – even while dedicating their lives to high spirituality.’ They read palms, interpreted dreams and sold charms; they promoted yoga as the way to sexual ecstasy (‘yoga,’ Broad tells us, means ‘union,’ and not just the spiritual kind).”

“At the current cultural moment, when women diet and exercise to achieve a boyish form, and don girdles – hiply re­baptized as Spanx – to heighten this effect, it’s jarring to see Taylor, with her nipped-in waist, straining bosom and generous hips, flirt and rage without apparent anxiety that she may be ‘bulging’ in both fleshly and emotive terms. Camille Paglia has called Taylor ‘prefeminist,’ believing that she expresses ‘woman’s ancient and eternal control of the sexual realm.'”

19. “Joe Eszterhas Sure Cleaned Up”

“At one of the early meetings, Adam Fogelson, Universal Pictures’ chairman, said to him, ‘Why do you want to do this story?’ Mel said, ‘Because I think I should.’ I liked that answer very much.”

20. “It Is Safe to Resume Ignoring the Prophets of Doom … Right?”

“For nearly a decade, it turns out, the most accurate forecasts have come from the fringe. So it’s upsetting to learn that many of those same Cassandras now believe, for different reasons, that we are on the brink of another catastrophe that may be far worse.”

“When the N.B.A. revealed its ambitious plans for China, it was pursuing the logical next step to expand its already successful business there. But the logic of the Chinese state was very different.”

23. “Stand-Up Comedy Without the Stand-Up. Or the Comedy.”

“The paradox of the podcast explosion among comics is that it’s at once a minirenaissance for comedy and a retreat by comics further into themselves – a sort of talking cure for a group of people who suffer from something not yet covered, I don’t believe, in the Diagnostic and Statistical Manual of Mental Disorders: a need, when not formally doing comedy, to talk about how and why one does comedy.”