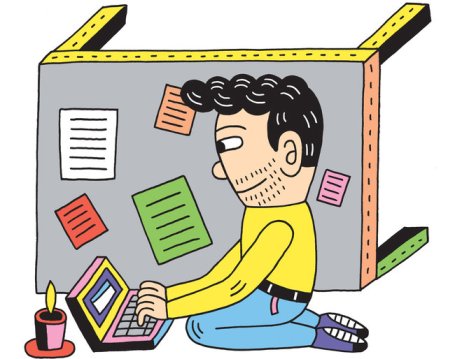 1. “The Rise of the New Groupthink”

“Solitude has long been associated with creativity and transcendence.”

2. “Among the Wealthiest One Percent, Many Variations”

“Most 1 percenters were born with socioeconomic advantages, which helps explain why the 1% is more likely than other Americans to have jobs, according to census data. They work longer hours, being three times more likely than the 99% to work more than 50 hours a week, and are more likely to be self-employed. Married 1 percenters are just as likely as other couples to have two incomes, but men are the big breadwinners, earning 75% of the money, compared with 64% of the income in other households.”

3. “Once Hidden by Forest, Carvings in Land Attest to Amazon’s Lost World”

“The deforestation that has stripped the Amazon since the 1970s has also exposed a long-hidden secret lurking underneath thick rain forest: flawlessly designed geometric shapes spanning hundreds of yards in diameter.”

“We tend to think it’s OK for people to go into debt to buy gadgets or take vacations.”

“In situations like this, people often automatically say ‘yes’ out of fear.”

“According to the National Institute of Mental Health, anxiety disorders now affect 18 percent of the adult population of the United States, or about 40 million people. By comparison, mood disorders – depression and bipolar illness, primarily – affect 9.5 percent. That makes anxiety the most common psychiatric complaint by a wide margin, and one for which we are increasingly well-medicated. Last spring, the drug research firm IMS Health released its annual report on pharmaceutical use in the United States. The anti-anxiety drug alprazolam – better known by its brand name, Xanax – was the top psychiatric drug on the list, clocking in at 46.3 million prescriptions in 2010.”

“During fruit fly courtship, the male, lured by a full larder, extends one mandolin-like wing and serenades the female, then engages in a style of oral sexual foreplay many humans enjoy. Then he mounts her and copulates for 20 minutes or so. Here’s the sly part. The last male she has sex with will sire most of her many offspring, and she chooses the father only after lots of romps in the orchard or lab, based on his flair for courtship.”

8. “Mourning in a Digital Age”

“Old customs no longer apply, yet new ones have yet to materialize.”

9. “Perfectly Happy, Even Without Happy Endings”

“She analyzed box-office hits and critically acclaimed movies on the American Film Institute’s favorites lists. She broke down their emotional components, isolated the elements of mood elevation and tested her findings against those of market researchers. She concluded: Positive movies do not necessarily have happy endings; their characters’ personal relationships trump personal achievements; and male and female viewers differ in how they define a character’s accomplishments.”

“When we pull up to Lowe’s, he takes a VIP parking spot, which is to say he drives his SUV right up to the door and hops out. Mostly we’re hunting for decorative moldings to give the staircase a quick hit of faux dignity. After scavenging through the store, he finally finds a handful of light wood ones – the better to curve with the staircase – and scoops them up.”

“In Distrust That Particular Flavor, Gibson pulls off a dazzling trick. Instead of predicting the future, he finds the future all around him, mashed up with the past, and reveals our own domain to us as a science-fictional marvel.”

“It began in 1918 when, Cohen reports, ‘a doctor at San Quentin prison … transplanted the testicles of an executed man into a senile 60-year-old inmate.'”

13. “What Friedrich Nietzsche Did to America”

“Emerson anticipated many of Nietzsche’s most famous utterances. There is a direct line from Emerson’s ‘oversoul’ to the ‘overman.’ Several decades before Nietzsche wrote, ‘What does not kill me makes me stronger,’ Emerson wrote, ‘In general, every evil to which we do not succumb, is a benefactor.’ More profoundly, Emerson foreshadowed Nietzsche’s concern with the ubiquity of flux and power, and the value of overcoming the past. ‘Life only avails,’ Emerson once wrote, ‘not the having lived. Power ceases in the instant of repose; it resides in the moment of transitions from a past to a new state.'”

“‘Americans like e-books because they’re easier to buy.’ A performance artist said, ‘They’re also easier not to read.'”

“Wall Street’s core function is to perform a sort of financial alchemy, an incredibly complicated method of giving a lot of people what they want.”

16. “The Chinese-Takeout Container Is Uniquely American”

“The structure has come to represent the idea of Eastern cuisine in Western society even though this packaging is not used for food containment in Chinese culture.”

“The central question driving literary aesthetics in the age of the iPad is no longer ‘How should novels be?’ but ‘Why write novels at all?'”