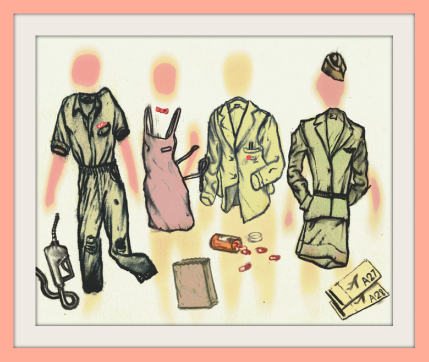 “Science fiction novels of a half-century ago dramatized conflicts between humans and robots, asking if people were controlling their technologies, or if the machines were actually in charge. A few decades later, with the digital revolution in juggernaut mode, the verdict is in. The robots have won. Although the automatons were supposedly going to free people by taking on life’s menial, repetitive tasks, frequently, technological innovation actually offloads such jobs onto human beings.”

“The poignancy surrounding the current spate of iPhone thefts is that Apple products have always read as cooler than their rivals’ because their design suggests a gleaming world of innovation and opportunity, of capitalism behaving well — a world that seems ever diminishing, ever less accessible to the struggling and young.”

3. “Storing the Stuff of Dreams”

“Behind the mute facade of a largely windowless neo-Gothic tower lies an ingenious system of steel vaults traveling on rails. Within those armored containers, which have been in continuous use since the Jazz Age, are stored some of New York City’s most precious objects and, presumably, a good number of its darkest secrets.”

“The ability to merge creativity with technology depends on one’s ability to be emotionally attuned to others. Mr. Jobs could be petulant and unkind in dealing with other people, which caused some to think he lacked basic emotional awareness. In fact, it was the opposite. He could size people up, understand their inner thoughts, cajole them, intimidate them, target their deepest vulnerabilities, and delight them at will.”

“In an era in which everything is archived and tracked, the best way to maintain privacy may be to give it up.”

“Twitter is many things to many people, but lately it has been a gold mine for scholars in fields like linguistics, sociology and psychology who are looking for real-time language data to analyze.”

“I enjoy the aesthetics of VHS. I like putting it in the VCR and rewinding and pausing and fast-forwarding. It’s an experience nobody gets to do anymore because they consider VHS dead.”

8. “Favorites of the Season, Cherished All Year”

“I’ve sometimes said that I’d never direct anything in which a character says, ‘Merry Christmas,’ unless she says it during an orgasm.”

“Avant-garde art movements generally take root in major cities. It helps to have a dense population of young artists competing for greatness. Perhaps that’s why it feels so surprising to stumble on Wright’s jolting modernism in the quiet countryside. Here, amid the emerald green fields, is Cubism (evoked in the jutting planes of his houses). Here is Surrealism (note his habit of turning a homely edge into a thing of curve and whimsy). Here are buildings whose forms must have once seemed as alien in this terrain as flying saucers.”

10. “Roaring at the Screen With Pauline Kael”

“I don’t trust anyone who doesn’t admit having at some time in his life enjoyed trashy American movies.”

11. “Lynda Barry Will Make You Believe In Yourself”

“In a drab fourth-floor classroom at Miami Dade, the two women, each in her late 40s, joined the 33 other students assembled — mostly women, mostly middle-aged and mostly creatively frustrated. At the front of the class, Barry wore an Emily Dickinson T-shirt, a red bandanna knotted atop her head. She was preparing to sing.”

12. “The Orchestral Maneuvers of John Maus”

“Apart from a keyboard and some recording gear stacked in a corner of the study, Maus’s spare cabin looks like the lair of a lonely grad student desperately trying to finish a dissertation on the concept of inoperative community. Which, in fact, it is.”