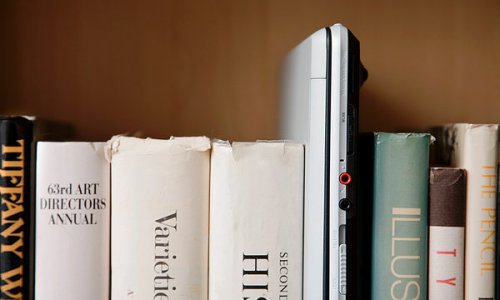 “Snooping, instead of being an antisocial activity, is actually prosocial. Our spaces are telling others what we’re like even when we’re not. These days, we need such boosts to communication, because as the demise of the bookshelf shows, our true selves are increasingly retreating from public display and disappearing inside our devices. We are becoming more invisible.”

“In a city where so many landmarks and historical remnants have been torn down and replaced, that sign is one of the few remaining tangible symbols of a center of glamour and celebrity that, in truth, is not quite as glamorous as it once was.”

3. “Mexico Turns to Social Media for Information and Survival”

“Planning before work protects you from regret.”

5. “And Now a Word From the Director”

“Mr. Polanski belongs to a long line of liars, adulterers, sadists and slaves, wife beaters, rapists, miscellaneous miscreants and even murderers who helped make Hollywood great. Charlie Chaplin liked young girls so much that three of his four wives were teenagers when they wed. Metro-Goldwyn-Mayer may have had more stars than there are in heaven, as it proudly crowed, but in the 1930s it also had an opium den on the lot and Christmastime orgies. Walt Disney … played Hollywood host to Hitler’s favorite filmmaker. In 1952 Elia Kazan gave up old colleagues to the House Committee on Un-American Activities and then went off to direct a handful of movies about betrayal, including one about selling out your nearest and dearest: On the Waterfront. It’s a classic.”

“There will be a group of true believers who will think that being in a room with a client is special and you can’t replicate that by remote involvement. But a lot of people, especially younger clinicians, will feel there is no basis for thinking this.”

“First developed about 20 years ago to streamline conversation on chat platforms like Usenet and IRC and popularized on AOL instant messenger and Gmail chat, terms like LOL (laugh out loud), OMG (oh my God) and BTW (by the way) now seem to be popping up in real life (IRL).”

“The fact is that most people can afford real food.”

“In a simpler world, trending would be harmless, the equivalent of baseball fans checking batting averages on a daily basis. But in a media culture that cares nothing about the past or the future, it’s one more way of narrowing our attention spans — this time, to the 140-character limit of a Twitter communication. (I can’t bring myself to say ‘tweet.’)”

“In some ways our parents see ‘success’ and ‘independence’ as synonyms, though no such conflation exists for many immigrants.”

“What this malleability means, according to nearly all the 105 prominent African-Americans interviewed for this book, is a liberating pursuit of individuality.”

14. “The Less Than Heroic Christopher Columbus”

“He was a harbinger of genocide. He was a Christianizing messiah. He was a pitiless slave master. He was a lionhearted seaman, a rapacious plunderer, a masterly navigator, a Janus-faced schemer, a liberator of oppressed tribes, a delusional megalomaniac. In Columbus, Laurence Bergreen, the author of several biographies, allows scope for all these judgments. But Christopher Columbus was in the first place a terribly interesting man — brilliant, audacious, volatile, paranoid, narcissistic, ruthless and (in the end) deeply unhappy.”

“For most of human history, the labor of men and animals was the sole source of energy, and that placed significant limits on how much energy we could use. Starting in the late 18th and early 19th century, humans harnessed the power of steam and coal to run machines, and the result was an explosion of material abundance. In 1957 Adm. Hyman Rickover, the great engineer who is known as the father of the nuclear Navy, calculated that a century earlier, in the early years of the industrial age, 94 percent of the world’s energy was provided by the labor of men and animals. Water and fossil fuels made up the remaining 6 percent. By the 1950s, those numbers had reversed, and coal, oil and natural gas supplied 93 percent of the world’s energy. Rickover pointed out that without this energy revolution, most of the material advances of the modern age would be impossible. A car, he said, uses the energy equivalent of the labor of 2,000 men — a jet plane that of 700,000 men.”

16. “When a Dictionary Could Outrage”

“Now all is legitimated under the rubric of pop culture.”

17. “Billy Beane of ‘Moneyball’ Has Given Up on His Own Hollywood Ending”

“The book arrived in 2003, a few years after Malcolm Gladwell’s Tipping Point, another book that valorizes unorthodox thinkers and offers the titillating prospect of new and radical ways to understand the inner workings of the world.”

“I could tell you who the line producer on ‘Saturday Night Live’ was when I was 12 years old.”