Jamin’ on the One 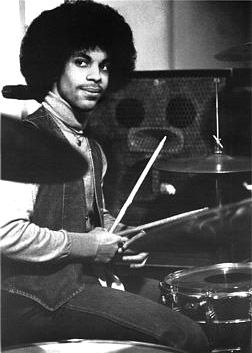 Prince at the drums back in the day

On what was an otherwise quiet Sunday evening for me a couple of weeks ago, Questlove – of The Roots and Late Night with Jimmy Fallon fame – tweeted this:

can i get your opinion on something? can you follow me? do you ever sleep? awkward edition of: #QuestionsIDONTLike

Questlove has almost 1.5 million followers on Twitter as I write this, so I can only imagine all the dumb questions he gets on a regular basis. I had, however, what I thought was a good question for him, so I posed it to him in a tweet:

@questlove How about: What do you think of Prince as a drummer? Be honest.

Now, I’m not in the habit of asking questions of celebrities on Twitter, but it’s something I’ve done a few times, each time never expecting, though I suppose secretly hoping for, a reply.

My question didn’t come out of nowhere. I’ve been a fan of The Roots since buying their first full-length album Do You Want More?!!!??! on cassette when it came out in 1995, and a Prince fanatic since well before that. Namely, the sort of Prince fanatic who’s prone to idly wonder if Prince’s prodigious electric guitar playing has overshadowed his prodigious drumming and beat making, and what the racial implications of this might be. I’ve long known Questlove was a huge Prince fan, and his recent live-tweetings of multiple Prince “Welcome 2 America” concerts at Madison Square Garden, not to mention his recent choice Prince playlist in Rolling Stone, reminded me of this fact.

Lo and behold, a short while later, Questlove replied to me:

@mattthomas 2 of my biggest influences on my "drunken" style are 2 drummers not known for their (cont) http://tl.gd/8gddv2

This tweet was more or less just a link to Questlove’s TwitLonger reply. TwitLonger isn’t a service I use, mainly because I feel like it’s antithetical to the spirit of Twitter, which is partly about limits, and I think constraints are important, but in this case I was willing to overlook it.

Here’s Questlove’s reply in full, edited slightly to make it easier to read and laced with links:

Two of my biggest influences on my “drunken” style are two drummers not known for their drumming: Stevie and Prince.

I know it’s uber-cliche and lazy when every artist in black music lists them as influences, but in this case their unorthodox styles kinda caught my ear early.

Stevie’s gift is his process of hi hat and cymbal hitting. Since he came from the School of Motown in which two drummers would share simultaneous duties, it’s only natural for him to utilize the same method on his own records.

Peep “Love Having You Around” on Music of My Mind – that trombone solo is hillllllllarious. He hits that hi hat so freely and sloppily. And the same with his zepplin-bonzo-style, ride-and-crash cymbal work on “I Wish,” “All Day Sucker,” and “Black Man.” And “That Girl” hits it so hard you wanna call child services.

Prince on the other hand … his fluctuating rhythm gives you the sense that an actual band is playing his stuff. Best demonstrated by his “careful or you’ll drop it” drunken pace on Dirty Mind’s title track. His overexcited virgin getting some Muppet Animal style of “Irresistible Bitch,” the maniac drumline snare solo of “Lady Cab Driver,” and the inventiveness of Parade’s first four song suite.

Last month when he grabbed the bass, I knew exactly where to go. I’ve learned when you jam with Prince, you get better results playing the drums as he would’ve played it. Which in my case worked like gangbusters (our “Cloreen” was about 25 minutes long and marked the first time that two-hour night he sang on the mic).

Of course, there are always “better” cats, but sometimes better ain’t “better.” In other words, Dylan is a poet’s poet. But if I put him in a cypher with five killer MCs, would he fare well? Same for ’81-era Steve Vai … would he fit in the J.B.’s circa ’69?

I look for more “color” and less “flash’ when I jam with other cats. It’s easy to juggle nine balls on a unicycle, but so much harder to make a mark keeping it simple. The latter is my route. If your simplicity speaks louder than “LOOKATMELOOKATME!!!!!!!!!!” then thumbs up.

Where to even begin.

I think Questlove’s reply largely speaks for itself; nevertheless, there are a few things I’d like to add.

One, Questlove clearly put some thought into his answer. He could have replied to my tweet with “I love Prince’s drumming!”  but didn’t. Instead, he basically wrote me a letter. I appreciate the effort he put into it. I felt like I learned something reading it. It was almost as if (as my brother later pointed out), itching to proclaim his love for Stevie’s and Prince’s drumming, Questlove had been waiting years for someone to ask him this question.

Two, I agree wholeheartedly with Questlove’s “more color and less flash” argument. Back when I used to work in a music store, I used to get in arguments about the merits of prog rock. (Funny how one never gets into such arguments in real life.) Though there’s music that might technically be considered prog rock that I like, I’d always argue that prog rock sucked, much to the chagrin of my Dream Theater-loving coworkers. For what shall it profit a man, if he shall gain incredible technical virtuosity, and lose his own soul?

Three, our mini-exchange, which caught several hundred other people’s attention if all the re-tweets I saw were any indication, was abetted by Twitter. What other medium, or combination of media, would have as easily allowed me, someone who doesn’t know or have any business with Questlove, to ask him such a question, and made it so easy for him to respond? Twitter works differently than other social networks. Namely, Twitter’s asymmetry means I can follow Questlove even if he doesn’t follow me back, yet he still theoretically sees any tweet of mine that contains his username. Today all it takes is one tweet to capture the ear of your favorite celebrity. Or, to paraphrase Amanda Ann Klein, Facebook is for connecting with people you already know; Twitter is for connecting with people you’d like to know.

If I didn’t already love Twitter, Questlove’s reply to my question would have convinced me of its value. Thanks, Questlove.

Note: The title of this post is a reference to Stevie Wonder’s delightful second-season appearance on The Cosby Show. If you haven’t seen it, or haven’t see it recently, you should watch it.

8 responses to “Jamin’ on the One”