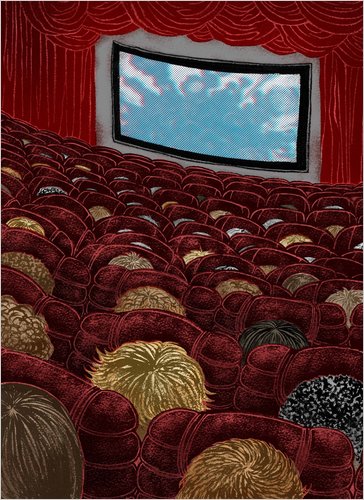 “The traditional relationship between film and television has reversed, as American movies have become conservative and cautious, while scripted series, on both broadcast networks and cable, are often more daring, topical and willing to risk giving offense.”

“Academic overload is not what actors are known for, but Mr. Franco has gone beyond that as well; he is creatively outstretched.”

3. “Job Satisfaction vs. a Big Paycheck”

“Beyond household income of $75,000 a year, money ‘does nothing for happiness, enjoyment, sadness or stress.'”

“Gibson used to write about an imagined future; now he writes about a half-imagined, half-real present in which it is almost impossible to tell the difference between what is real and what is imagined.”

“In the ranks of captured and confessed terrorists, engineers and engineering students are significantly overrepresented.”

“Does their popularity indicate that they are successfully conveying an experience of war to audiences in a way that is at least as effective and affecting as the war stories told in literature or film?”

“The doctors, lawyers, judges, mayors, civic elders and odd Buffalo Bills linemen who patronize O’Connell’s would never tolerate dents. And they like that the store has never merchandised its stock so much as warehoused it; towers of trousers rise 40 pairs high. Customers also groove on the constancy: year after year the same club-handled ebony hairbrush by Kent in England, the same hand-carved walking stick with mortise-and-tenon joinery by Whistle Creek in Colorado, the same rainbow of no-name brass-grommeted grosgrain watchbands. That almost the entire world has come around to the O’Connell’s way of thinking this season — Burberry with its General MacArthur greatcoats, Billy Reid with crew-neck sweaters that are meant to be be beat up and stretched out — is a coincidence that Huber finds vaguely unpleasant. Among his private-label goods, only tie and lapel widths are revisited, and then with agony. A board meeting is called, and Huber and his sons, John and Ethan, do the dirty deed.”

“After losing to Sonny Liston in the first round in Chicago, Patterson drove all the way back to New York wearing a disguise.”