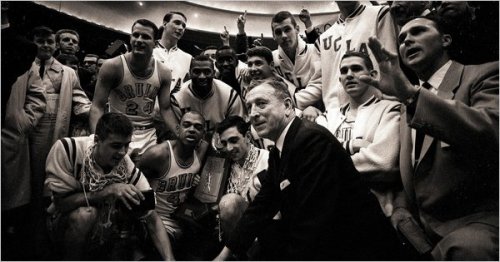 “Wooden was a dignified, scholarly man who spoke with the precise language of the English teacher he once was. He always carried a piece of paper with a message from his father that read: ‘Be true to yourself. Make each day a masterpiece. Help others. Drink deeply from good books. Make friendship a fine art. Build a shelter against a rainy day.'”

“Stephens joins a growing number of colleges putting out a welcome mat for pets. They include the Massachusetts Institute of Technology and the State University of New York at Canton, which allow cats in some dorm rooms; and Eckerd College in South Florida and Washington & Jefferson College in Pennsylvania, which set aside rooms for students with dogs or cats and others who love animals so much they just want to live near them.”

3. “The Most Popular Gym Is the City Itself”

“Its mild climate, the lack of parks in its more dense areas and the propensity here to treat fitness a bit like performance art combine to make Los Angeles a municipal force in the art of improvised exercise. From the wealthy neighborhoods of Brentwood, where a traffic median is used as a track, to tiny parks in low-income neighborhoods downtown, where picnic benches are used for bench presses, the city often looks like one giant outdoor gym.”

“Not to sound egotistical, but there aren’t many people who do what I do.”

5. “A Baseball Natural Just Wanted to Be Normal”

“Griffey told me last year he has never once been drunk. At all times, he wants to be in control — of his body, of his environment — and he feared what could happen if he used.”

“Shows on the network aren’t introduced on a hunch about a strong creative concept. Instead, Bravo begins by studying its audience’s lifestyle and preferences — what is the market need? — and then creates shows and stars that reflect them.”

“Kubrick called The Killer Inside Me, which came out in 1952, ‘probably the most chilling and believable first-person story of a criminally warped mind I have ever encountered.’ The book is arguably Thompson’s best and embodies many of the difficulties entailed in translating his work to the screen. It’s the story of Lou Ford, a deputy sheriff in a small Texas town, seemingly bland and ineffectual, who turns out to be a compulsive and heartless killer. So, to begin with, there are scenes of creepy violence, including a famous passage, describing the murder of a prostitute, that begins: ‘I backed her against the wall, slugging, and it was like pounding a pumpkin. Hard, then everything giving away at once.'”

“The gravest of these sins in my unscientific survey are behavioral: the women act like ugly Americans and debase every aspect of Muslim culture they come in contact with. Also: they’re women.”

“This is a measured manifesto. Even as Carr bemoans his vanishing attention span, he’s careful to note the usefulness of the Internet, which provides us with access to a near infinitude of information. We might be consigned to the intellectual shallows, but these shallows are as wide as a vast ocean.”

“Our brains are physical systems and hence have finite resources. The real problem here — what Chabris and Simons call ‘the illusion of attention’ — is that we are often unaware of these limitations; we think that we see the world as it really is, but ‘our vivid visual experience belies a striking mental blindness.'”

“As far as I could tell, the two driving philosophical forces at the Buffalo mansion were freeganism and hedonism. The freegans were making a statement and having a hell of a good time doing it. It was a social experiment worthy of Henry David Thoreau, a place buzzing with industry, self-reliance and eco-consciousness; but, at times, it was also a rollicking frat house. Mornings could be dead quiet when the freegans were sleeping off their hangovers.”