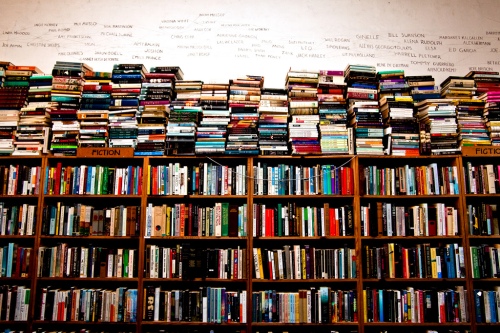 Much of the discourse surrounding electronic books – e.g., Apple’s iPad, Amazon’s Kindle, Barnes & Noble’s nook, and Sony’s Reader – is what David Edgerton might call “innovation-centric.” That is, a lot of the talk about electronic books is about how, at some indeterminate but nevertheless rapidly approaching point in the future, after having definitively obsolesced printed periodicals, electronic books will supplant the granddaddy of all media: printed books.

Here, for instance, is Jacob Weisberg on the Kindle:

The Kindle 2 signals that after a happy, 550-year union, reading and printing are getting separated. It tells us that printed books, the most important artifacts of human civilization, are going to join newspapers and magazines on the road to obsolescence.

Yet old and new technologies tend, more often than not, to co-exist for a while. Old technologies, to borrow a line from General Douglas MacArthur, never die, they just fade way.

Moreover, new doesn’t necessarily mean better. Indeed, printed books may actually be technologically superior in many ways – at this stage of the game at least – to the e-books vying to supersede them. (People sometimes forget that books are a technology.)

To explain what I mean by this, I turn to Gabriel Zaid’s wonderful little book So Many Books: Reading and Publishing in an Age of Abundance. In it, Zaid gives six reasons why books are superior to other forms of media.

Let’s look at each in turn.

Zaid’s first point is that books can be skimmed easily. That is, one can flip through a book to get a quick idea of its content. In this respect, Zaid argues, only paintings and photographs are superior to books because you can take them in all at once. Yes, you can scrub through video and audio recordings, but not nearly as easily as you can flip through a book. At this point I think it’s probably safe to say it’s actually easier to skim articles on the Web than it is to skim e-books, and that’s a pretty damning indictment of e-books in my view. Electronics books can, of course, be searched, but they can’t easily be skimmed. This strikes me as an important distinction.

Zaid’s second point is that books can be read at a pace determined by the reader. He writes, “A book can be explored at thousands of words per minute with speed-reading techniques, or one revelatory line can be lingerly contemplated. And it is so easy to turn back, to reread, to halt, to skip things that are of no interest.” In theory, you can read e-books at your own pace as well, but I wonder if the fact that electronic texts are hard to skim also makes it hard to take them in at different speeds. After all, if you can’t skim an e-book first, how do you know what to linger over and what to skip?

Zaid’s third point is that books are portable. But then so are e-books. You never have to plug a book in first in order read it however. [Idea for a Twilight Zone episode set in the not-too-distant future: Everyone on Earth is killed in a nuclear war except for one man who loves to read, and finally he has all the time in the world in which to do so. By this point, however, all books are e-books. The twist is, just as our main character is sitting down in the ruins of the public library to read, the power goes out and he has no way to recharge his Kindle.] And although something like an unabridged dictionary isn’t very portable, a small, slim paperback is clearly more portable than any present-day e-book device expect for maybe the iPhone, not to mention infinitely more flexible.

His fourth point is that you don’t need to make an appointment to read a book. This is one of the major advantages books have over something like television, though digital video recorders increasingly allow people to “time shift” TV shows, but that’s interesting in and of itself because it points to one of the areas where books have had the advantage all along. Zaid’s larger point here seems to be that books are available whenever and wherever, that you can move between books easily, and that you can move within books easily, a potent trifecta.

Zaid’s fifth point is that books are cheap. “Millions of readers,” he observes, “can afford to buy a collection of great books.” E-books might be cheaper in the long run because they can be copied for free and distributed for pennies, but the initial costs are still pretty high. E-book readers are bourgeois devices. Think about how many books can you buy for the price of the cheapest iPad (currently $499). Particularly if they’re used books.

His final point is that books permit greater variety. One day, I suppose, nearly all books will be available electronically. But that day isn’t here yet. And there are some real legal and technological hurdles to be worked out before that happens.

As Zaid puts it:

Perhaps modern technology’s greatest tribute to the advantages of the age-old book is the attempt to develop electronic screens as thin and flexible as paper, hundreds of which could be bound into something like a book, which would have the same visual and typographic appearance as a book and even the same tactile feel, without electric or electronic cords, e-book readers disguised as printed books.

Viewed from this perspective, it’s not so much that books are getting replaced as it is perhaps that new media forms, in order to compete with books, are increasingly taking on some of the characteristics of books. All of which raises the question: Why not just read an old-fashioned, printed book?

This entry was posted in books, longreads, reading, technology. Bookmark the permalink.