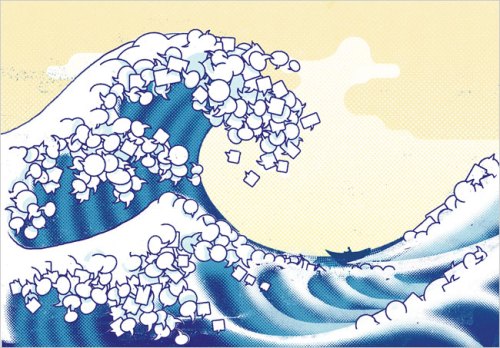 “Like many newbies on Twitter, I vastly overestimated the importance of broadcasting on Twitter and after a while, I realized that I was not Moses and neither Twitter nor its users were wondering what I thought. Nearly a year in, I’ve come to understand that the real value of the service is listening to a wired collective voice.”

2. “Living on Nothing but Food Stamps”

“One in eight Americans now receives food stamps, including one in four children.”

“Quietly but noticeably over the past year, Americans have rejiggered their lives to elevate experiences over things.”

4. “The Cost of High Anxiety About Flying”

5. “A World of Megabeats and Megabytes”

6. “Floating in the Digital Experience”

“Although much has been made of the technologies used in Avatar, its beauty and nominal politics, it is the social experience of the movie — as an event that needs to be enjoyed with other people for maximum impact — which is more interesting. That’s particularly true after a decade when watching movies became an increasingly solitary affair, something between you and your laptop. Avatar affirms the deep pleasures of the communal, and it does so by exploiting a technology (3-D), which appears to invite you into the movie even as it also forces you to remain attentively in your seat.”

7. “The Ballad of Blu-ray and Scratchy Old Film”

“Turner Classic Movies online says that of the 162,984 films listed in its database (based on the authoritative AFI Catalog), only 5,980 (3.67 percent) are available on home video.”

“In a decade marked by perpetual apprehension and irrational exuberance, he was the most musically inventive, the most psychologically complicated, and the most emblematic of the times: an exemplar of creativity through, and about, chaos.”

9. “The Naked and the Conflicted”

“Our new batch of young or youngish male novelists are not dreaming up Portnoys or Rabbits. The current sexual style is more childlike; innocence is more fashionable than virility, the cuddle preferable to sex.”

“We are born with a highly structured brain. But those brains are also transformed by our experiences, especially our early experiences. More than any other animal, we humans constantly reshape our environment. We also have an exceptionally long childhood and especially plastic young brains. Each new generation of children grows up in the new environment its parents have created, and each generation of brains becomes wired in a different way. The human mind can change radically in just a few generations.”

11. “The Case of the Vanishing Full-Time Professor”

“In 1960, 75 percent of college instructors were full-time tenured or tenure-track professors; today only 27 percent are. The rest are graduate students or adjunct and contingent faculty — instructors employed on a per-course or yearly contract basis, usually without benefits and earning a third or less of what their tenured colleagues make. The recession means their numbers are growing.”

“Over the past several years, scientists have looked deeper into how brains age and confirmed that they continue to develop through and beyond middle age.”

“Even before they arrive on campus, students — and their parents — are increasingly focused on what comes after college. What’s the return on investment, especially as the cost of that investment keeps rising? How will that major translate into a job?”

“Today, fewer than 10 percent of undergraduates major in one of the humanities (compared with a quarter who major in business), partly because they fear it won’t help them get a job. Unless, of course, they want to be a professor.”