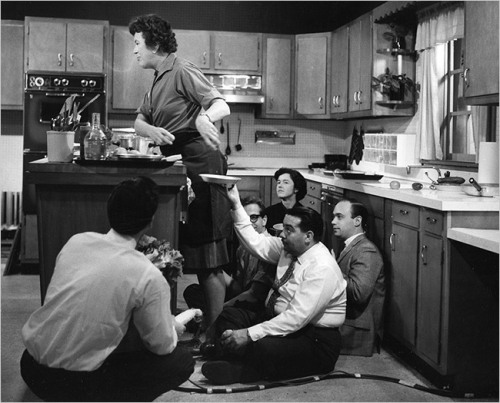 2. “School Is Out but Education Doesn’t Stop for the Obama Daughters This Summer”

“The Obamas discussed the slave trade with their girls during a visit to a slave port in Ghana. They focused on volunteering at Fort McNair in Virginia, where the girls helped stuff backpacks with books and toys for the children of military families. In Rome, they arranged for Malia and Sasha to make gelato and to see how fresh fruit — bananas and blackberries, in particular — can be transformed into mouthwatering sweetness. The Obamas are sticklers for emphasizing structure and discipline in their child rearing. Summertime, they have made clear, provides no respite from the rules. ‘The television and the computers are off all day until after dinner and right before bedtime,’ Mrs. Obama said during a June visit to San Francisco as she described her daughters’ summer routine. ‘Bedtime is early.'”

3. “Full Stomachs, and Full Marriages Too”

“For the unemployed, the standing advice about how to find work involves doggedly attending job fairs and reaching out to everyone in your e-mail address book. But increasingly, a lesser-known avenue with the potential to be effective, thanks to the emotional bonds formed during undergraduate years, turns out to be the alma mater.”

“Professor Leiter conducted an informal poll in March on his philosophy blog, asking, ‘Which person do you most wish the media would stop referring to as a “philosopher”?’ The choices were Jacques Derrida, Ms. Rand and Leo Strauss. Ms. Rand won by a landslide, with 75 percent of the roughly 1,500 votes cast.”

6. “Serendipity, Lost in the Digital Deluge”

“The digital age is stamping out serendipity.”

7. “For the Unemployed, the Day Stacks Up Differently”

“On an average weekday, the unemployed sleep an hour more than their employed peers. They tidy the house, do laundry and yard work for more than two hours, twice as much as the employed. The unemployed also spend an extra hour in the classroom and an additional 70 minutes in front of the television.”

“In the summer of 1979, the director Werner Herzog found himself in the Peruvian river-port city of Iquitos preparing for Fitzcarraldo, a period epic starring Jason Robards and Mick Jagger that he planned to shoot in the rain forest. Two and a half years later, he was still there, struggling to finish. Robards and Jagger had long since quit, rendering their footage unusable. Locals had set fire to the filmmakers’ camp; the crew fled waving white flags. Robards’s replacement, the German actor Klaus Kinski, had proved so difficult that two Indian chiefs who witnessed his behavior approached Herzog and helpfully offered to murder him. Another member of the filmmaking team had gone completely insane, grabbed a machete and taken hostages. By then, surrounded by bugs and snakes and rooting pigs, beset by injuries and chronically, critically short of money, Herzog apparently found nothing particularly outlandish in what was happening, so consumed was he by a film that all reason suggested he should have abandoned several crises earlier. ‘I live my life or I end my life with this project,’ he said.”