Get Yourself a College Girl 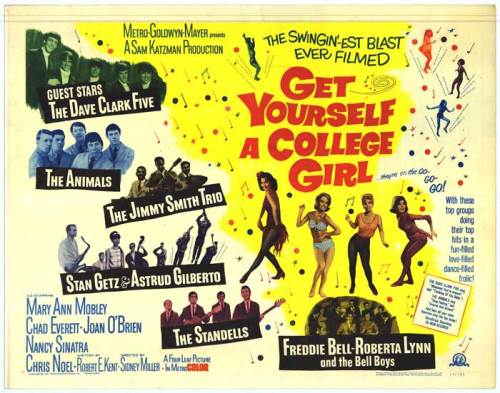 Last week I was watching TCM in the middle of the afternoon when Get Yourself a College Girl (1964) came on. It’s a Beach Party clone, one of those mindless ’60s movies where girls wear bikinis almost exclusively and everyone dances the Watusi.

Though I’ve never felt any particular affection for the genre, I literally couldn’t stop watching Get Yourself a College Girl. I found myself feeling a bit like Giles De’Ath (John Hurt) in the criminally-underrated Love and Death on Long Island (1997) when he stumbles upon the work of Ronnie Bostock (Jason Priestley), star of such B-movies as Hotpants College 2 – i.e., inexplicably finding great depth and beauty in kitsch.

The film is easy to dismiss, and as dismissals go, Howard Thompson’s 1965 New York Times review is a classic: “Get Yourself a College Girl deserves – and gets here – a one-line verdict: idiocy strictly for the birds. Or maybe the Animals. They’re in it, if anybody cares.”

On one level, Thompson may have been right. The movie isn’t available on home video, which suggests maybe nobody does care. (If you want to watch it, you’ll have to wait until TCM airs it again.)

The film’s plot – such as it is – revolves around a demure college student named Terry (played by 24-year-old former Miss America Mary Ann Mobley) who is paying her way through college by writing provocative pop songs.

There’s some interesting stuff to be found here about academe, nascent second wave feminism, and race (e.g., the scene in which, in order to show the Senator Morrison character’s fuddy-duddy point of view, shots of white American teenagers dancing are intercut with stock footage of African “savages” jumping around).

Perhaps the most notable thing about the film, however, is its music. Indeed, after watching it, I felt compelled to buy a used copy of the soundtrack (which, as luck would have it, was released on compact disc in 1992).

Produced by Sam Katzman (who was also responsible for Rock Around the Clock [1956]), the movie features performances by The Dave Clark Five, The Animals, Stan Getz, the Jimmy Smith Trio, The Standells, and Freddie Bell and the Bell Boys with Roberta Linn. As perhaps the definitive overview of the film puts it,

Get Yourself A College Girl features not just a great list of starring musical acts, but an extensive one: in addition to a performance of the title number by Mobley, we’re treated almost every ten minutes [to] … a wonderfully broad array of acts, running the gamut from two variants of the British invasion, to Latin-flavored jazz, to early garage rock, and even Las Vegas-type lounge.

The Dave Clark Five’s appearance is noteworthy because it’s apparently the first time a British rock & roll group appeared in an American 1960s pop film, but it’s the Stan Getz Quartet featuring Astrud Gilbero’s performance of “The Girl from Ipanema” that’s the real show-stopper. It may even be “the single finest performance of the entire Beach Party genre.”

In true Giles De’Ath fashion, however, it’s the stupid, sexy title number by Mobley that captivates me the most. Have a listen.

2 responses to “Get Yourself a College Girl”