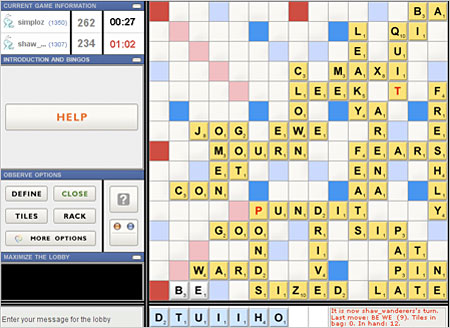 “The latest bane of office productivity is Scrabulous, a virtual knockoff of the Scrabble board game, with over 700,000 players a day and nearly three million registered users.”

“Pale, thin, high-strung, with the baggy eyes of someone who doesn’t get enough sleep, he could even be a guy looking to score a little coke — something Mr. Price admits to doing with regularity back in the ’80s. He walks quickly, jokes a lot without smiling much, and, as readers of his books know, has a pitch-perfect mastery of urban speech in all its varieties. He may be the only middle-aged white man in America who can say ‘True dat’ without sounding ridiculous.”

3. “The Mind of a One-Woman Multitude”

“‘I swear to God, this must be my artistic peak,’ Ms. Badu said in an earlier interview at Electric Lady, where she walked around barefoot, belled anklets jingling above her tiny manicured feet. ‘I hope my sexual peak comes soon too,’ she added, and laughed. Then, switching to bohemian mama mode: ‘If something happened to me, I would want them to say, “This is what your mother was about.”’”

“There’s a scene near the end of The Asphalt Jungle in which the criminal mastermind known as Doc (Sam Jaffe), wounded and on the run after the job, muses dazedly: ‘You put in hours and hours of planning, figure everything down to the last detail, then what? Burglar alarms start to go off all over the place for no sensible reason, a gun fires of its own accord, and a man is shot.’ He finishes, mumbling to himself, ‘Blind accidents, what can you do against blind accidents?’ That’s the genre in a nutshell.”

“This movement to unplug appears to be gaining traction everywhere, from the blogosphere, where wired types like Ariel Meadow Stallings (http://electrolicious.com/unplugged) brag about turning off the screen one day a week (and how many books they’ve read so far this year), to the corporate world. For example, Nathan Zeldes, a principal engineer at Intel (employees there read or send three million e-mail messages daily), is running a couple of experiments, one in which people spend a morning a week at work but offline, another in which people consciously reduce their e-mail output. Though he’s not reporting results, he’s encouraged and he says people are participating.”

“Just thinking out loud here, but is it possible that the younger generations of white men feel familiar with sports stars of African-American heritage, and this carries over to Obama?”

7. “Tales From the Firing Line”

“After lunch, we went to the parking garage in order to drive to another building. Before we got into the car, Bill asked where the men’s room was. I said there would be one at our destination, only a few minutes away. Without a word, he put down his omnipresent pile of papers, walked over to a pillar, and relieved himself. Then he returned to the car, winked, and said, ‘It’s sterile, you know.’”

8. “In Acapulco, a Return to Glamour”

“For many, this resort city of more than 700,000 people on Mexico’s southern Pacific coast is synonymous not with upscale chic, but with tourist hell: cruise ships unloading high-decibel families, spring breakers sloshing through drinks-to-go. Even the word itself, ‘Acapulco,’ can sound a bit over-giddy, a name forever resonating in the shrieks of hyperventilating housewives winning vacation packages on ‘The Price Is Right.’ But Acapulco is having its second act, reappearing from the fanny pack-strewn beaches to recapture its faded Hollywood glory.”

“The Duncan House opened for rental last June, after being moved in pieces to its present site about 35 miles southeast of Pittsburgh from Illinois, where it was in imminent danger of becoming a teardown. Since then, it has been rented nearly every weekend and much of the time in between; reservations should be made far in advance. Most of the other rentable Wrights — all in the Midwest — have been open only a few years longer and are also regularly booked.”

“Tootsie was conceived, consciously or not, to be re-enacted. Watch it just once, and you’ll find it eminently memorizable, quotable, performable. A large part of the enjoyment of Tootsie is the happy anticipation of trying out the material on your own stage. And that’s what makes it great.”

“During the fall of 2003, Principal Mansell asked her entire faculty to read Boys and Girls Learn Differently! and, in the spring of 2004, to attend a one-day seminar led by Sax at the school, explaining boys’ and girls’ innate differences and how to teach to them. She also invited all Foley Intermediate School parents to a meeting extolling the virtues of single-sex public education. Enough parents were impressed that when Foley Intermediate, a school of 322 fourth and fifth graders, reopened after summer recess, the school had four single-sex classrooms: a girls’ and a boys’ class in both the fourth and fifth grades.”

“In fact, the physical act of moving your possessions from Manhattan to Brooklyn is now the equivalent of a two-year M.F.A. program. When you get to the other side, they hand you three Moleskine notebooks and a copy of Blogging for Dummies. You’re good to go.”

13. “What a Difference a Freakishly Long, Ungodly Talented, Defensive Wizard of a Man Makes”

“‘People seem to think it’s easier to coach younger players than older players, but it’s really the opposite.’ This is the Celtics’ coach, Doc Rivers, speaking. Last month, he coached in the N.B.A. All-Star Game; last year, his name was usually mentioned only in reference to the possibility of his termination. ‘Most veterans in our league have had their day and chased the idea of being a star, and now they’ve fallen back to whatever they really are. They know who they are. Young guys always want to prove they’re better than whatever role you give them. They won’t buy into the system. They always say that they will, but the minute they have the chance to score, they’ll try to prove that they can be a scorer.’”