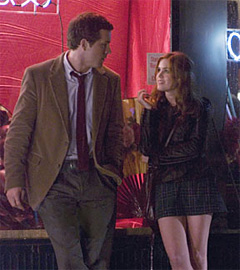 There’s a great scene in Definitely, Maybe in which the characters played by Ryan Reynolds and Isla Fisher bump into one another in a convenience store and flirtatiously debate the merits of Marlboro Reds versus American Spirits. Reynolds’s character can’t believe Fisher’s character pays a couple dollars more per pack for “natural” cigarettes. Fisher’s character counters that Marlboros contain additives to make them burn faster; thus, although she pays more per pack, each of her cigarettes lasts longer so she ends up paying less money in the long run. Skeptical, and more than a bit intrigued by her joie de vivre, Reynolds’s character agrees to an impromptu “smoke off” outside the store. Outside they light up at the same time and continue their flirting. Reynolds’s character loses the contest when his Marlboro Red burns down before her American Spirit, but he wins an opportunity to accompany Fisher’s character to a party that evening. It’s her birthday and her boyfriend has stood her up. She’s looking for a date and he quickly agrees to accompany her.

What’s noteworthy to me about the scene – other than the chemistry the two actors have – is the role cigarettes play in it. That is, cigarettes help bring the two of them together. They also lend the scene an erotic charge. It’s as if time has stopped and these are the only two people in the world. When Fisher’s character coolly blows smoke out of her mouth and seductively gestures with her cigarette, she’s arguably more appealing to Reynolds’s character (and to us as audience members) than she would be if she were sans a cigarette. As Richard Klein writes in Cigarettes Are Sublime, a wonderful, nearly 200-page apologia for the beauty and benefits of cigarettes,

For many women, at certain moments, lighting a cigarette is the socially countenanced mode of signaling hostile or aggressively sexual feelings aroused by the intrusion of another subjectivity. In circumstances when a man might display anger or come on to her, a woman will often light up, summoning fire and smoke, jabbing with the tip of her cigarette between nails or teeth. That explains why, among women, smoking began with those who got paid for staging their sexuality: the actress, the Gypsy, the whore. Such a woman violates traditional roles by defiantly, actively giving herself pleasure instead of passively receiving it. Lighting a cigarette is a demonstration of mastery that violates the assumptions of feminine pudeur, the delicate embarrassment women are expected to feel, or at least display, in the presence of what their innocence and dignity are supposed to prevent them from desiring. A woman smoking may be thought to be less “feminine” because more active, aggressive, masterful, but she is not therefore more “masculine” – in her own eyes or in those of many men; she may in fact be more desirable because she appears to be more free. (117)

Scenes such as this one, of course, can be found in lots of movies (e.g. The Big Sleep [1946]), but they seem less and less common. It’s significant that the scene is set in 1992, before the present anti-smoking campaign in the United States really took off. Though I don’t smoke, scenes like this one almost make me want to. No wonder some people bemoan Hollywood’s glamorization of smoking. Still, as Tom Chiarella’s recent and fascinating Esquire piece “Learning to Smoke” suggests, I am not alone in wanting to do something that movies make look so cool, if only for a short while.

This entry was posted in articles, gender, longreads, movies, smoking. Bookmark the permalink.

2 responses to “Cigarettes Are Sublime”